Unsure of where to begin? Swing into some of these greatest Web-Spinner books!

We know how daunting it can be to dive into comics.

Whether you've discovered Miles Morales with Spider-Man: Into the Spider-Verse, the Marvel's Spider-Man: Miles Morales video game, or plastered on your favorite tee, we want to help deepen your love for Brooklyn's Spider-Man. And what better way than through the pages of some web-slingin' comics!

In the alternate reality, a young New York City teen was bitten by a genetically-enhanced spider. When the Peter Parker of that dimension was killed, the teen—named Miles Morales—was inspired to take up the fallen mantle. Where the original Spider-Man lived by his Uncle Ben's maxim, "With great power comes great responsibility," Miles adds the addendum, "What would Peter Parker do?"

As a fan of Miles Morales, now that you know the basics, and want to start reading comics to find out how he ends up in the main Marvel Universe of Earth-616, but don't know where to start; don't worry, we've got you!

This tells the origin of Miles Morales in the Ultimate universe, as well as being a great introduction to Miles as a character. 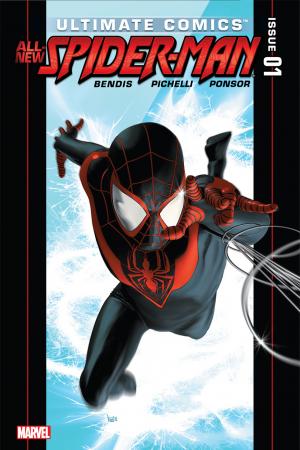 Then check out Spider-Men #1

Miles Morales meets the main Marvel Universe Peter Parker from Earth-616 for the first time thanks to Multiverse shenanigans with Mysterio.

Then you have Secret Wars

This was the epic crossover event, with literal universes colliding in on each other, the results of which brought Miles Morales into the main Marvel Universe.

You've also got the SPIDER-MAN (2016) series, which is Miles' first solo outing after coming into the main Marvel Universe.

Then dive into Miles Morales: Spider-Man

MILES MORALES: SPIDER-MAN is one of his more recent storylines featuring things like his own 'Clone Saga.'

AND WE'VE GOT ANOTHER NEW TEAM-UP

CHAMPIONS sees Miles on a team of younger Marvel heroes like Ms. Marvel, Nova, teen Cyclops, Viv Vision, and the Totally Awesome Hulk Amadeus Cho, who all want to make a better future for everyone.

Of course, we can’t forget the iconic Spider-Verse

When the unstoppable Morlun returns, it will take every Spider-Man EVER throughout the Multiverse to stop him!

That should be enough to get you started. Happy reading!