Why Franklin Richards Should Join the X-Men

Krakoa is for all mutants. We run down the pros and cons from ‘X-Men/Fantastic Four,’ now on Marvel Unlimited.

Franklin Richards is a mutant. A powerful one. And, at the start of X-MEN/FANTASTIC FOUR (2020) #1, he’s a young teen being jostled between his birthright… and the world’s most famous Super Hero family. The son of Mister Fantastic and the Invisible Woman, Franklin’s latent reality-warping abilities were teased as far back as FANTASTIC FOUR (1961) #130,  but it took until FANTASTIC FOUR #238 to officially confirm his mutant status. While Franklin’s family has often adventured through dimensions of time and space, his own parents have struggled to cope with their son’s unlimited psychic power.

Now on Marvel Unlimited: the first issue from the X-MEN/FANTASTIC FOUR limited series starring an aged-up Franklin. Now in control of his own destiny (or at least believing he is), Franklin is offered the opportunity to leave behind his family for the X-Men’s promised future on Krakoa, the island-nation state now home to all of mutantkind. With their own government, their own commerce, and their own leverage over key aspects of human society, Krakoa is a paradisiacal haven for anyone with an X-gene… and wholly separate from the human world. For an Omega-level mutant like Franklin, Krakoa also seems like the only place on Earth where he can achieve his full potential. 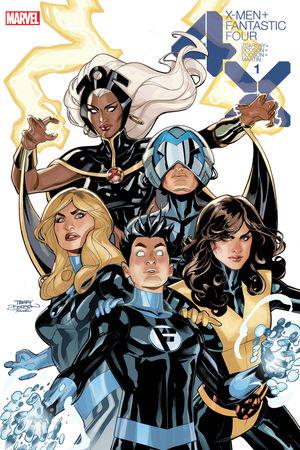 For any parent whose child is ready to fly the coop, letting go is far from easy. But the Fantastic Four are in a particular bind. Mutantkind’s place in the world still has untold ramifications on all of humanity, and Charles Xavier and Magneto are adamant to make an offer the family can’t refuse.

While we can make a compelling argument for both sides, ultimately it falls to us readers!

Should Franklin Richards join the X-Men and leave the Fantastic Four? Yes, and no, and here’s why:

Yea, that. In HOUSE OF X (2019) #5, it was revealed that a group of mutants, collectively known as “The Five,” have the ability to resurrect the dead through an incubation procedure that takes place in Arbor Magna, one of Krakoa’s many biomes.

The process behind these “Resurrection Protocols” is complex, and there are still many questions about Xavier’s DNA banks that house “backups” of each and every mutant. So far, the resurrected have their age, memories, and consciousness intact. An elaborate reentrance ceremony welcomes back those who have fallen, a unifying act for the whole.

Globally! A byproduct of the flowers of Krakoa, the mutant world can now grow interconnected portals called “Gateways.” Two Gateways connect to one pathway, and can lead to anywhere on Earth, even the Moon. The fastest mode of transport for any Krakoan citizen, Gateways grant mutantkind safe passage while keeping humans out. Conveniently, there’s a Gateway located right near the FF’s Yancy Street home in Manhattan, another selling point for Franklin who can feel close to home while being far, far away.

At series start, Franklin’s mutant abilities are dysfunctional and severely dampened. While Mister Fantastic makes every effort to help his son, his scientific scope is limited to superhuman physiology. Charles Xavier points out that Franklin may require Krakoa’s mutant expertise to restore his full self. Reed Richards may be one of the smartest people in the Marvel Universe, but mutant understands mutant.

And, it’s not just about a power tune-up! On Krakoa, Franklin would belong to a mutant community, one with its own language, culture, and set of rules.

Reed, Sue, Johnny Storm, and Ben Grimm have kept a vigilant watch over Franklin and his super-genius sister Valeria, completely justified given their occupational hazards. By issue’s end though, we learn a new wrinkle about Reed Richards’ “protection” over his son.

Krakoa represents freedom for a kid looking to break out of the family biz. Mutant mentors may step in to offer counsel, training, and friendship, but on Krakoa each mutant is their own leader. Xavier’s Institute has been disbanded in favor of a more open learning plan, one that encompasses the whole island.

Tiki bars, lagoons, an ever-growing Akademos Habitat overrun by young, party-hard mutants… Franklin still has a bit more aging up to do before he can enjoy all that Krakoa has to offer, but it’s pretty clear that this sovereign island-nation is the place to be if you want to throw down.

And frankly, a bit of a jerk. Although Xavier requested Kitty Pryde’s help to recruit Franklin (she and the teen have history), the X-Men’s founder withheld pleasantries to strong-arm his way into the FF’s home… with Magneto in tow. This was not well received! Sue Storm was enraged at the pressure being placed on her son, and it pushed Reed to further question Xavier’s motives and methods.

A cliché that happens to be true.

Krakoa may be Franklin’s “birthright,” but it’s not where he was raised. Since his birth in FANTASTIC FOUR ANNUAL (1963) #6, Franklin has lived in both the Baxter Building and on Yancy Street, the FF’s residential base.

In the words of Franklin’s parents: diplomatic immunity be damned. Their son’s home is wherever they are. Period.

For all their genetic similarities, the X-Men can never replace Franklin’s parents, sister, or Uncles Johnny and Ben. And the FF are in it for the long haul. Despite a few hiatuses and team switch-ups, the core Four have been adamant about staying in the same place and on the same page. Marvel’s First Family understands a Super Hero lifestyle under the glare of the public eye. And, they’re better equipped to handle the various Super Villains they’ve collected over the years. Krakoa may have X-FORCE, but Reed and Sue know that their children are safest from an Annihilus or Doctor Doom-level threat under their watch.

Not the first time Franklin’s parents have had to deal with an aged-up, dimensionally-split version of their son either—back in FANTASTIC FOUR (1961) #245, the Invisible Woman confronted an adult version of her little boy, older and amnesiac due to an erratic spike in his powers.

KRAKOA IS A TARGET.

In the Thing’s own words, Krakoa is open for attack. Citing the tragic demise of mutant nation Genosha, Ben Grimm acknowledges that having every single mutant in a single location may prove more hazardous than helpful. While more than one hundred nations have recognized Krakoa, there are plenty more who would see this island sink to the bottom of the sea.

Who will Franklin choose? Read X-MEN/FANTASTIC FOUR (2020) #1 for this super-powered family feud by Chip Zdarsky and Terry Dodson.

See the rest of this week’s new Marvel Unlimited titles, and check out our top picks of the week!