The Contest welcomes its latest Champion — Man-Thing. You can grab the former college biochemistry professor in Marvel Contest of Champions now!

Do you feel its glowing eyes peering out at you. Man-Thing is unconcerned with your Champions' futile attempts to punch their way through him.

The Man-Thing was once the brilliant biochemist Dr. Ted Sallis. While working for S.H.I.E.L.D. to replicate the Super Soldier Serum, Dr. Sallis was forced to flee due to an A.I.M. plot to steal his work. Injecting himself with the only remaining sample of his serum before crashing his car into the swamp while on the run. Rather than dying from that crash, he was reformed into a creature made of the swamp itself, the Man-Thing!

As a Mystic character class, Man-Thing's basic mechanics include Poison, Armor Break, and Nullify. Man-Thing is all about punishing Buffs, whether they came from its opponent’s kit, or whether it placed them on the opponent itself. This is done by Nullifying Buffs, which converts them into Toxic Pustule Buffs, which can subsequently be Nullified into both Poison and Armor Break, ideally with Man-Thing’s Heavy Attack for bonus potency.

When attacking in to Man-Thing the loop is very similar, but the Nullify is more likely to come from Man-Thing’s on Contact chance to Nullify, which scales off his Agitation. The last thing to consider are Man-Thing’s immunities, allowing it to ignore Armor Break and Shattered, as well as Bleed, and take vastly reduced damage from Critical Hits. Make sure to bring someone who can raise their Attack nice and high, ideally without Buffs, and don’t expect to be able to crit your way through the Man-Thing! 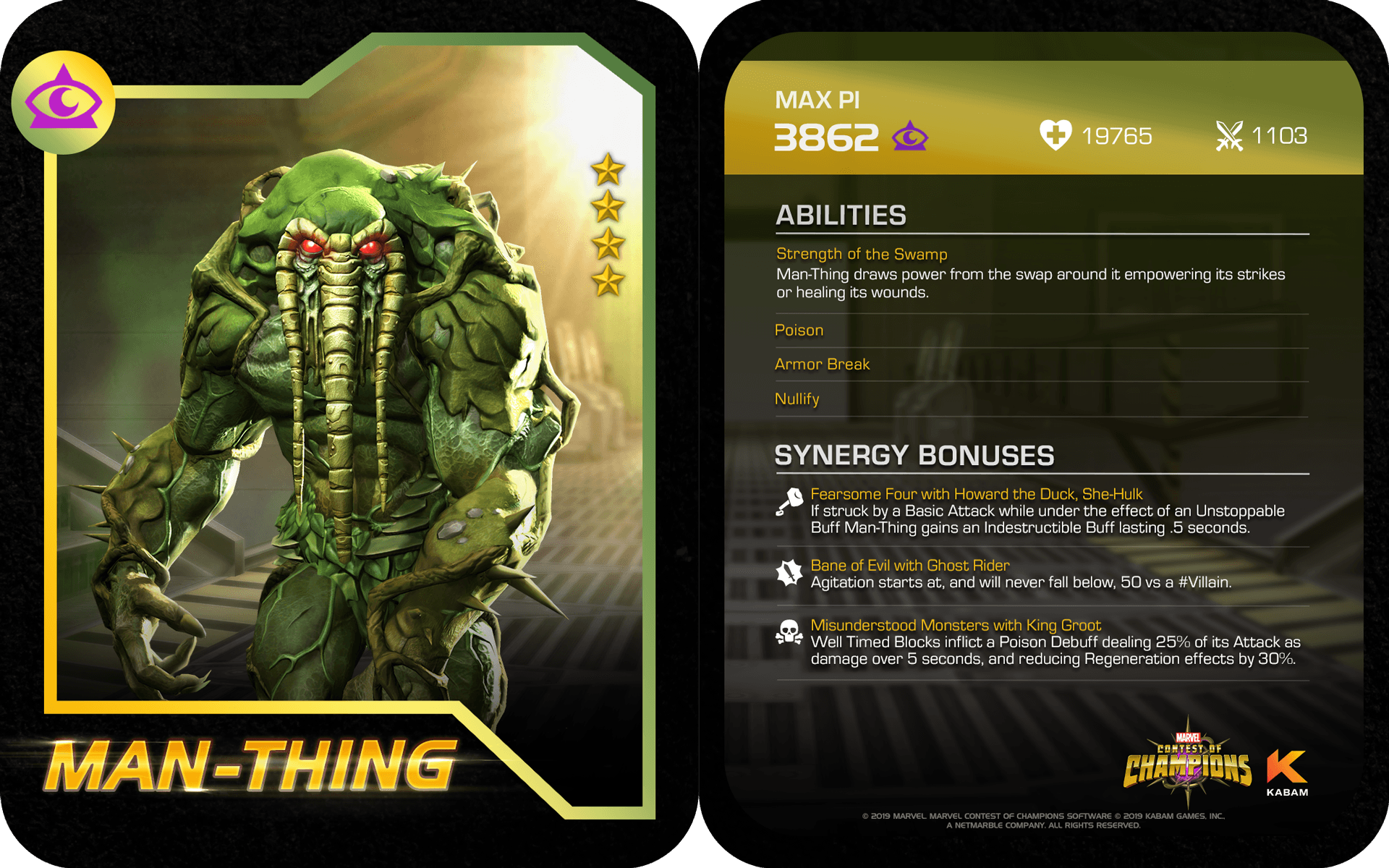 Man-Thing's Strengths include Nullify, true to its Mystic roots, Man-Thing loves to eat Buffs, with a chance to Nullify each time it makes contact, and on its Special 2; Sustain, Man-Thing has one of the largest Base HP pools in the game, its Signature Ability gives it a consistent Regeneration ability, and it doesn’t care about Critical Hits, which leaves you with a champion who can still recover even after a couple of mistakes; and Immunities, since it’s essentially made out of compacted swamp mush Man-Thing comes with built in Immunity to Bleed and Armor Break, as well as ignoring the bonus damage caused by Critical Hits.

On the other end of the spectrum, Man-Thing's Weaknesses include No Armor, hand in hand with its Armor Break Immunity makes him vulnerable to anyone who can bring a solid increase to their Attack, as they get the full value of any attack increase, undiluted by Armor; Nullify/Poison/Armor Break Immune, where running into an Opponent who can counter his mechanics can definitely slow this swamp monster down; and Regeneration Counters, which can be turned against him with effects like Petrify, or just turned off with Heal Block.

Man-Thing's took kit includes 3 Specials and 1 Signature Ability. With its first Special, Armed and Dangerous, Man-Thing uses a part of itself as a weapon, splattering its opponent with caustic slime. Special Attack 2 sees Man-Thing unleashing blasts of Toxic Bursts of swamp sludge, slamming its opponents away. Man-Thing reacts to the aggression its opponents heart, attempting to burn it away, before striking them down with Special 3, Evil's Bane. Lastly, Man-Thing's Signature Ability Strength of the Swamp sees it drawing power from the swamp around it empowering its strikes or healing its wounds.

Receive Synergy Bonuses when you utilize Fearsome Four with Howard the Duck and She-Hulk, Bane of Evil with Ghost Rider, Things with Thing, and Misunderstood Monsters with King Groot.

Man-Thing is available for download now on Marvel Contest of Champions on iOS and Android devices!

In this article: Marvel Contest of Champions, Man-Thing

Watch out for Tippy-Toe!

They look similar, but one has a much more dangerous mission...

He's trying to protect his planet from certain Annihilation