Captain Marvel: What The Flerk Is A Flerken?

Everything you need to know about Captain Marvel’s cat!

Warning: there are spoilers ahead for Marvel Studios' "Captain Marvel"!

One of the biggest scene stealers in Marvel Studios' "Captain Marvel" is none other than Goose the Cat. This feline companion attaches herself to Carol Danvers and Nick Fury’s journey, and she plays a large role in the conclusion. Goose also frightens both the Skrull and the Kree, which believe that he is an alien creature known as a Flerken. Much to Fury’s surprise, the aliens were right all along.

So what exactly is a Flerken? Fortunately, the answer can easily be found in the CAPTAIN MARVEL comics. Within the Marvel Universe, Carol’s beloved kitty is called Chewie, not Goose. But there are similarities. Both felines are actually members of the Flerken race who have taken a liking to Carol. They may look like cats, but it would be a serious mistake to approach them without exercising caution. One of the heroes in the film discovered that the hard way.

Have you ever suspected that your cats understand more English than they let on? For Flerkens, this is also true. Their intelligence is well above a normal cat’s, and they can understand human speech even if they can’t respond with their own.

Perhaps the most shocking aspect of the Flerkens are the massive tentacles that emerge from their mouths which can devour a person or an alien whole in moments. Note that Fury, in "Captain Marvel," was still able to hold on to Goose after that happened. That’s because the body of the Flerkens contain pocket dimensions with enough space to store entire universes. Therefore, the weight of an alien body wouldn’t be present in a Flerken stomach. 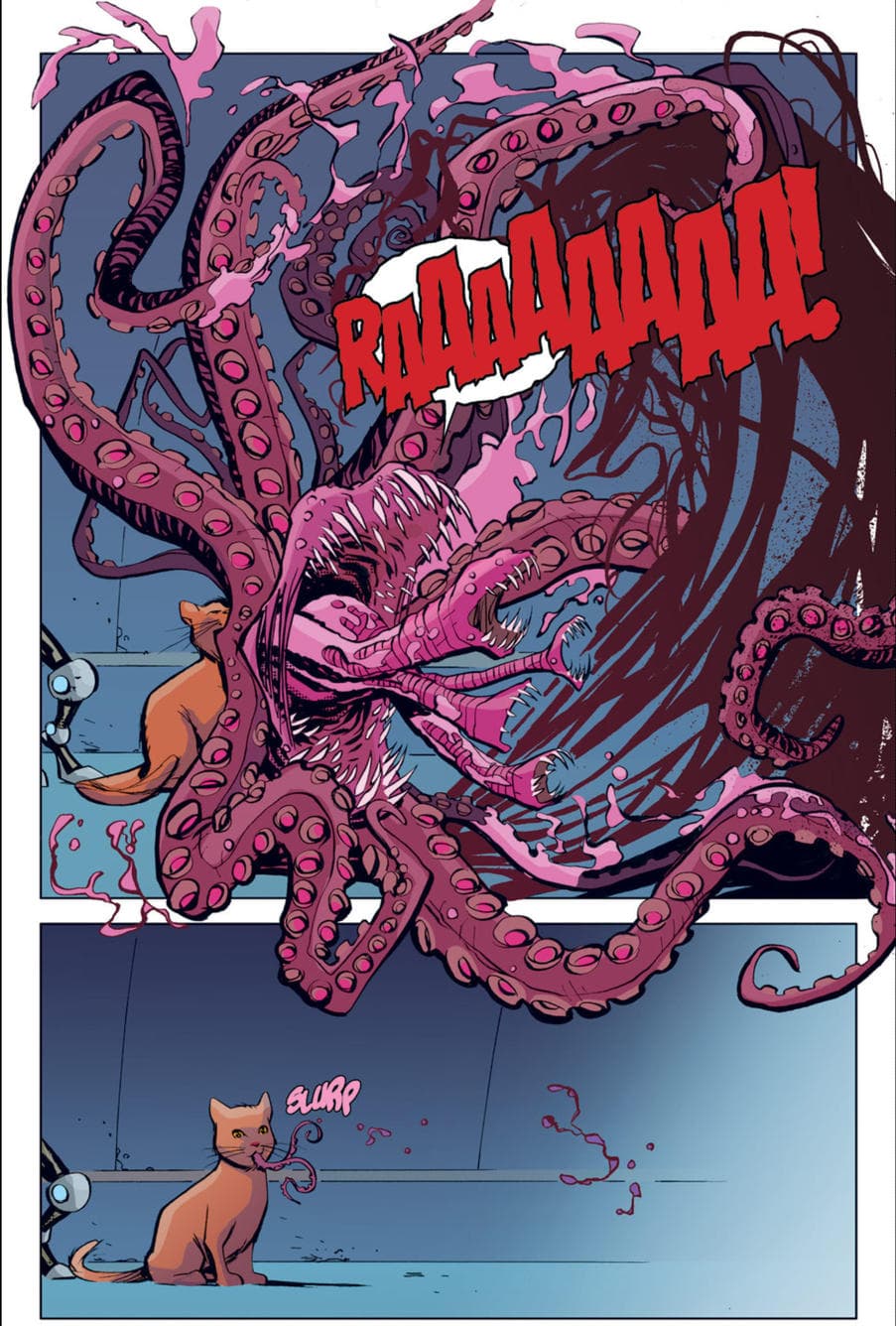 Within the comics, Flerkens also possess the ability to teleport, thanks to their previously mentioned inner dimensions. Additionally, Flerkens have been known to simultaneously lay eggs for over 100 offspring. Chewie did this as well, which confirmed that she was a Flerken. But after seeing to the safety of her children, Chewie used her teleportation powers to return to Carol’s side.

By the end of "Captain Marvel," Goose has a new home with an unexpected owner. But we suspect she’ll show up again at some point. Flerkens live a lot longer than cats, and this is one kitty we can’t get enough from.

Read up on the comics origins of Chewie the Cat and Flerkens here.

"Captain Marvel" is in theaters now! Get tickets on Fandango: http://fandango.com/captainmarvel

The End Is Just the Beginning in ‘Captain Marvel’ #22

Carol Danvers’ life has been rocked to its core!

A List of Every Character Known as Ms. Marvel