READ “KILLMONGER: BY ANY MEANS” HERE!

Bryan Edward Hill and artist Juan Ferreyra’s KILLMONGER (2018) limited series tapped into the desire of fans to know even more about Black Panther’s eternal foe. Readers were rewarded with a thrilling and lavishly illustrated tale of revenge that serves as a prequel to Killmonger’s first appearance in the classic “Panther’s Rage” storyline. (Issues #19-22 are now free on MU!) Now, you can read the entire KILLMONGER series for free as well, all on digital comics mega-archive Marvel Unlimited.

KILLMONGER revealed previously unknown information about his life before his return to Wakanda. He had the chance to find love and companionship. A chance to follow the Panther goddess Bast, and a chance to chart a new life course. But Killmonger ultimately made the wrong decisions. At least from a “heroic” perspective. Yet the lasting tragedy of Killmonger’s life remains compelling, and this series sheds a new light on his complicated past and greatest motivations.

The first issue revisited the events that led Killmonger to live most of his life in exile. Young N'Jadaka was spared by the traitorous M'Demwe and the invader, Ulysses Klaue. It was Klaue who gave N’Jadaka the name “Erik,” while M’Demwe taught him how to kill. Erik repaid M’Demwe’s lessons by murdering him years later. He also attempted unsuccessfully to assassinate Ulysses after his transformation into the sonic Super Villain Klaw.

Ironically, Erik still took Klaue’s lessons to heart even after trying to kill him. In a flashback from issue #2, it was Klaue that taught young Erik that killing shouldn’t be “complex.” It’s just business.

Erik didn’t just study at M.I.T., he was at the top of his class. In issue #1, Erik’s guidance counselor, Hannah Weeks, informed him that numerous companies wanted to recruit him. Erik rejected them all out of hand, before successfully seducing Hannah. But that was no gesture of love, Erik simply did it because he could. He didn’t even hide his contempt for Hannah as he left her life forever.

KILLMONGER (2018) also revealed that Erik was forcibly recruited into a team of enhanced mercenaries led by a low-level telekinetic calling himself “King.” “Rook” was a man with a healing factor, while “Knight” was a young woman with superhuman strength. Erik reluctantly joined the crew as “Pawn,” and soon came to feel a kinship with each member of this commando squad.

Unfortunately, the team’s employer was Wilson Fisk, AKA Kingpin. And as soon as the team was no longer useful to him, Fisk sent Bullseye to eliminate them.

LOVE IS A BATTLEFIELD

By issue #3, Knight revealed that her real name was Patricia Jackson, while Erik lowered his emotional guard and accepted her into his heart. Erik even offered to make Patricia a queen once he returned to Wakanda to claim the throne. However, Patricia had her own dreams and desires. She wanted to be a S.H.I.E.L.D. agent like Black Widow. Natasha Romanoff even oversaw Patricia’s recruitment, and she encouraged her to use Erik as an asset.

PATRON OF A GODDESS

Patricia’s choice led to grave consequences in issue #4, as well as a transformative moment for Erik. Prior to this fateful day, Erik had visions of the Panther goddess, Bast, telling him to come home and serve his king, T’Challa (issue #3). But now, Erik had a vision of a new goddess who encouraged his darkest impulses. She gave Erik the name Killmonger and helped set him on his path of destruction.

Within the final issue of the series, Killmonger learned that this unknown goddess was K'Liluna the Betrayer, who was also “the sister of Mother Bast.”

Killmonger’s slender build was significantly upgraded by issue #5. He credited K'Liluna, but his transformation suggests that Killmonger adopted an intensive physical regimen.

With startling ease, Killmonger unleashed his vengeance, even making Black Widow look helpless in his wake. By this time, Killmonger’s chance to make different choices was gone. Killmonger also finally met T’Challa, and he seemed to genuinely appreciate his welcome back into Wakanda. But as readers of “Panther’s Rage” know, that was simply a way to lull T’Challa into a false sense of security before striking at his kingdom from within. 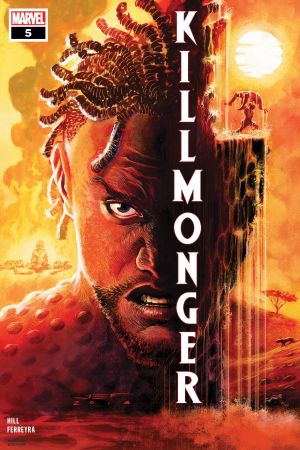 We hope you’ve learned something too! Unpack even more about Black Panther’s Biggest Bad in KILLMONGER (2018) #1-5, available to read now on Marvel Unlimited.

From his bouts with Black Panther to his time with the Illuminati, Namor the Sub-Mariner has a rich history as Marvel's longest-running hero (or antihero? or villain?!).