Before the New 'Atlantis Attacks,' Read the Original Comic Event from 1989

Thirty years later, we’re taking a trip back under the sea for the comic crossover!

Just when you thought it was safe to go back in the water, Atlantis is striking back in 2020! Greg Pak and artist Ario Andito are reviving ATLANTIS ATTACKS with a new five-issue miniseries that will pit the Agents of Atlas against King Namor and the army of Atlantis.

While the ATLANTIS ATTACKS story shares a name with the crossover story from 1989, the circumstances are very different. Over the course of a 14-part epic, the vast majority of Marvel heroes were drawn into a conspiracy that had its roots in the Hyborian Age of Conan the Barbarian. Robert E. Howard created Set, the serpent god, for his Conan stories, but decades later, Set very nearly overpowered the entire Marvel Universe in ATLANTIS ATTACKS.

Peter Sanderson and artist Mark Bagley were paired on the “Saga of the Serpent Crown” backup stories, which set the stage for the events in the present by adding context to the past. These Marvel annuals also had a murderers’ row of all-time greats among the creative teams; Mike Baron, Gerry Conway, Steve Engelhart, David Michelinie, Louise Simonson, and Roy Thomas were among the contributing writers. John Byrne pulled double duty as both a writer and an artist on multiple issues. He was also joined by pencilers Rob Liefeld, Rich Buckler, Al Migrom, Mike Vosburg, and Ron Wilson.

Unlike previous crossovers within the Marvel annuals, ATLANTIS ATTACKS played out like an old-fashioned serial. SILVER SURFER ANNUAL #2 kicked off the adventure when the Surfer accidentally resurrected Ghaur, a long-time enemy of the Eternals. Ghaur escaped the Surfer and reclaimed control of the Deviants. He also formed an alliance with Llyra of the Lemurians and Attuma, the warlord ruler of Atlantis, in order to bring Set back to Earth and assume control of the entire world. 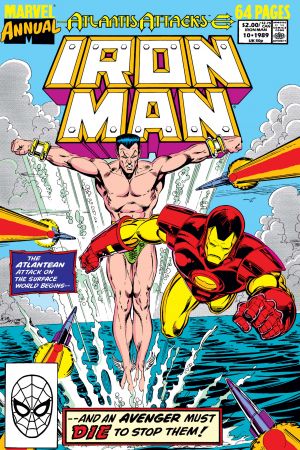 Atlantis began its assault in IRON MAN ANNUAL #10, which featured the apparent death of Namor. While the Sub-Mariner didn’t actually die, he was briefly moved off the board as he let his enemies believe he was dead. X-MEN ANNUAL #13 got the mutant heroes indirectly involved in a bizarre heist that had Cloak and Dagger’s primary bad guy Mister Jip swap Dazzler and Diamondback’s minds to make the X-Men do his bidding.

AMAZING SPIDER-MAN ANNUAL #23, THE PUNISHER ANNUAL #2, PETER PARKER, THE SPECTACULAR SPIDER-MAN ANNUAL #9, and DAREDEVIL ANNUAL #5 comprised a mini-arc within the larger story. In those issues, Tyrannus was freed from the Abomination’s body and he began creating Serpent Men for Ghaur, Llyra, and Attuma. The various heroes ultimately ended those plans, but they didn’t realize the true scope of the threat they were facing.

AVENGERS ANNUAL #18 depicted a full-scale Atlantean invasion, which was narrowly repulsed by the combined might of the team and its reserve members. The X-Men’s former trainees were also drawn into the underwater intrigue in NEW MUTANTS ANNUAL #5. However, the story really picked up steam in X-FACTOR ANNUAL #4, when Attuma tried to claim Jean Grey as his own after previously failing to make Phoenix his bride in BIZARRE ADVENTURES #27. But instead of becoming Attuma’s bride, Jean was taken by Ghaur to be among the Seven Brides of Set. To add further insult to injury, Ghaur also took Attuma’s estranged daughter Andromeda as another Bride of Set, thereby depriving Attuma of his victory over her. 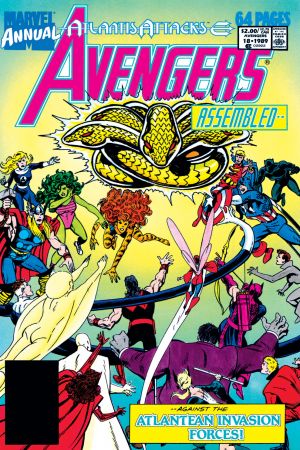 Attuma’s role in the story came to an abrupt end in WEB OF SPIDER-MAN ANNUAL #5, as Spider-Man and the Fantastic Four repelled Atlantis’ invasion of New York. Ghaur and Llyra picked that moment to destroy Atlantis and most of its people, leaving Attuma and his army defeated and badly demoralized by their betrayal. From there, the focus of the story fell on Ghaur and Llyra’s plans to use Set’s brides to bring the elder god back to Earth. By that point, Ghaur had added Dagger, Invisible Woman, Scarlet Witch, Storm, and She-Hulk to the lineup along with Jean Grey and Andromeda.

AVENGERS WEST COAST ANNUAL #4 revealed that the heroes-turned-brides had a mental connection that made them all act as one for the benefit of Set while retaining their personalities. The brides even allowed Ghaur to finally achieve his goal of summoning Set. THOR ANNUAL #14 featured one of the wildest Marvel battles to date, as Thor, Thing, Quasar, and Doctor Strange battled Set in his home dimension. Finally, FANTASTIC FOUR ANNUAL #22 brought the assembled heroes together for the last battle. Namor made a very timely return as well, and the brides got their revenge by using their connection against Set. Of course, there were a few twists in the finale as well, but those are better left to be discovered by reading through the issues. 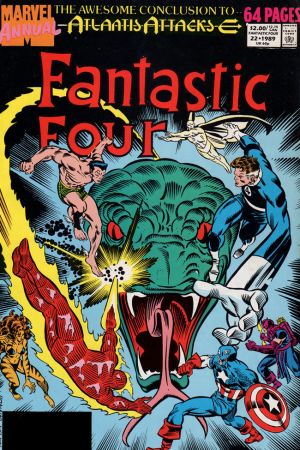 Check out the first batch of 'Infinity Saga Phase Three' covers, on sale in February!