T’Challa and Tony Stark failed to see eye to eye on a great many issues in the early 2000’s, stemming mainly from the former’s admission that he initially joined the Avengers to spy on the team. So, when the leader of a CIA front company wound up on the wrong end of an assassin’s bullet and the government approached Stark and the Avengers to investigate, the Panther didn’t take kindly to Iron Man’s request of his involvement to more easily “interface” with the urban Chicago-area community where the murder took place.

Considering that writer Christopher Priest and artist Sal Velluto's series often featured wildly intricate plots and plans in the works from our title hero, it should come as no surprise that T’Challa didn’t work directly with Stark because of the involvement of Solomon’s Frogs! Those same mystical objects that originally appeared in Jack Kirby’s first BLACK PANTHER arc, also lead to the appearance of the Kirby-esque Panther who seemed to relish the act of fighting villains, many of whom were also created by “The King.”

The five-part “Enemy of the State II” ended with an epic Iron Man and Black Panther fight, the resolution of a few time paradoxes, and a reconciliation of sorts between Tony and T’Challa. 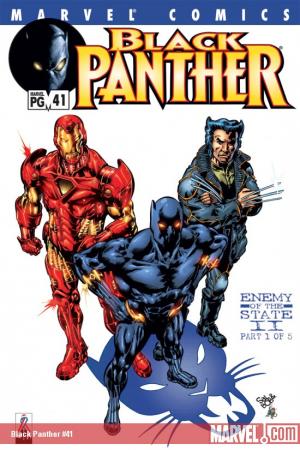 From the halls of Washington, the gang transported to 1875 to a Wild West town called Danville thanks to Henry Peter Gyrich messing with the Frogs. In addition to meeting up with classic Western characters like Two-Gun Kid, Kid Colt, and Rawhide Kid, Panther and company also encounter two other familiar faces: Thor and Loki! This story actually takes place around the same time as MIGHTY THOR #370 from 1986!

Finally, the group returned to their own time where they mourned the loss of the Kirby-esque Black Panther who passed away because of a brain aneurysm. While many assumed this version came from the past, we discovered that he actually hailed from the future and that his sunny demeanor came from the realization that his time on Earth ran short. We also discover that the aneurysm’s roots spanned back to the fight Panther had with the mind-warped Iron Fist as seen in the previous arc.

Speaking of losing control of oneself, T’Challa experienced exactly that while facing off with Man-Ape and his people. In the process he almost killed Queen Divine Justice and ultimately abandoned not just his post but his costume.

In addition to leading T’Challa down the path to be explored in the remaining issues of this series, the king’s attack on Queen Divine Justice led to another major change. To make reparations for injuring her, T’Challa agreed to not only release her from the Dora Milaje, but also allow her people, the White Gorilla tribe, to be free and live their own lives. Queen did appear to help the new guy in the cat suit, but that’s been about it.