Great ‘Echh’-Spectations: When Marvel Got into the Humor Game

Look back at how Marvel poked fun at itself in the pages of ‘Not Brand Ecch’!

Many say that laughter is the best medicine. We're certain none of those advocates happen to be doctors, but we do agree that a life lived with laughter lightens the load. Marvel decided to create some of its own medicine a few years into the Super Hero renaissance by launching a book called NOT BRAND ECHH. The latest episode of This Week in Marvel put the spotlight on NOT BRAND ECHH and even more of Marvel's silly mags, so make sure to give it a listen!

Aimed at parodying stars like Spider-Man, Captain America, the Avengers, the Fantastic Four and maybe even a few folks from the Distinguished Competition, the series debuted in 1967. By 1969, NOT BRAND ECHH -- and its mascot Forbush Man -- had run its course and come to an end with 13 issues on the stands. Along the way, some of the biggest names in the House of Ideas came together to have a lot of fun.

Up to this point, Marvel Comics were known for their mix of real-world problems, all-out action, and moments of levity. Through his various columns, including the Bullpen communiqués, Stan Lee created the most fun-sounding office on the planet, one where everyone had nicknames and yucked it up with each other.

With NOT BRANCH ECHH, humor took center stage, as you can see from the first cover drawn by Jack Kirby which features the Fantastical Four, Doctor Bloom, the Silver Burper, a Batverian minion and a cat terrified by the approaching Forbush Man.

The first of four vignettes inside continues the craziness in a chronicle called "The Silver Burper" by Lee and Kirby starring Thung, Weed Wichards, the Human Scorch, and Inevitable Girl.

A running gag throughout the strip revolves around Weed attempting to turn the Thung back into regular old Bim Grimm. He balks at the smell and refuses until Wichards says, "If you don't drink it, I'll explain the Negative Zone to you again!" With that, he gives it a swig and definitely does change... into the Hulk as well as a Skrull, the Mandarin, and others. In fact, these transformations elicit huge laughter and the Inevitable Girl line "Y'know why everyone loves our stories? They're so realistic!"

From there, we cut to Dr. Bloom of Batveria, "the ex-dentist who turned to supervillainy, for the sheer sport of it." He stole the Silver Burper's powers for a while until the heroes showed up and Bloom got scared off by Thung's face turning in his.

The second installment, called "The Fastest Gums in the West," came from Roy Thomas and Marie Severin. In it, the Too-Gone Kid chased down Rawhide Kid and Kid Colt for making off with real fake gold.

From there you get the original Human Scorch taking on the Sunk-Mariner thanks to Lee, Thomas, Ross Andru, and Bill Everett, who created the actual Namor. One of the best visual gags in the whole issue comes at the end of this series when we get a look at the Happy Haven Home for Hoary Halcyon Heroes which includes more than a few familiar faces from Marvel and beyond.

Finally, the first issue ends with "A Day of Blunder" from Gary Friedrich and John Severin and starring Sgt. Furious and his Hostile Commandos, who pass the time playing Old Maid as the yarn begins unraveling.

And that's just the first issue. As the series progressed, readers were treated a variety of covers drawn by Marie Severin and Tom Sutton. In NOT BRAND ECHH #2, Lee and Severin pitted Spidey-Man against Gnatman. The third issue featured "The Origin of Sore, Son of Shmodin" by Lee and Kirby, bringing comedy to Jazzgard. Even Gene Colan got in on the action starting in issue #4 when he drew a Scaredevil story.

Forbush Man came to the forefront in issue #5 thanks to an origin story whipped up by Lee and Kirby. According to the tome, Irving Forbush worked in the Marble Comics Bullpen as a gofer acquiring "magic stuff" for Doctor Derange and spare parts for Iron Man. He also provided many of the sound effects for the books.

No matter what he did, he always felt ignored by everyone except for his overbearing Aunt Mayhem. Embarrassed by her nephew, she jammed a pot on his head which Irving considered both well-fitting and stylish. He poked a few eye holes in, grabbed some red long johns and a potato sack as well as a pair of galoshes, and thus, Forbush Man was born! On his first day out as a hero, he accidentally stopped Juggernut's rampage. 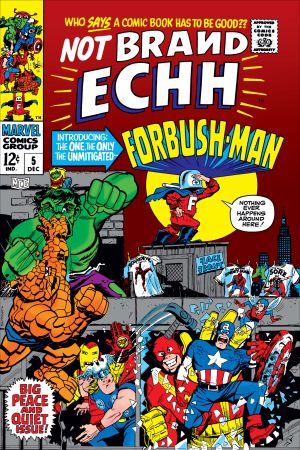 From there, the creators came together to create one delightful gag strip after another until the series came to an end with NOT BRAND ECHH #13, though the page numbers about doubled with issue #9, allowing for more parodies of other heroes as well as films and even a few appearances by the Beatles.

For even more about NOT BRAND ECHH and Marvel’s other humor books, listen to the latest episode of This Week in Marvel! You can download the full audio episode right here:

Stay tuned to Marvel.com for news about all upcoming releases!

Earn Points, Get RewardsJoin NOW!
In this article: This Week in Marvel