The Tony Award-winner and new host of 'This Week in Marvel' shares his personal memories of a tumultuous time in comics!

Calling James Monroe Iglehart a Renaissance man might be selling this multi-talented individual short. He’s a true master of his craft as well as a passionate lover of the finer things in culture. To whit, in addition to his Tony Award-winning turn as the Genie in Aladdin and acclaimed role as Marquis de Lafayette in Hamilton, both on Broadway, James can also be found taking in live professional wrestling and, as of this past month, co-hosting This Week in Marvel!

Catch a glimpse of James on a recent episode of Marvel's Voices here...

Without getting too cliché, you’ve probably never had a friend like James. But if you did, he’d be happy to tell you his history as a Marvel devotee with special attention paid to how he got his start at the House of Ideas in the notorious 1990s.

How did you become a comic book fan?

I always loved the Super Hero cartoons, I mean all of them. From Super Friends to Spider-Man and his Amazing Friends. So when I saw them in comic book form I fell in even more love with them. I didn’t have any money as a kid so I would always borrow my Uncle William’s comics and whatever my best friend Jon had.

Can you describe your first regular comic book shop?

Oh yes, Crush Comics in Castro Vally California. Again my best friend Jon shopped there so that’s where I went. All the new comics were on the left side wall when you walked in and then boxes and boxes of the older stuff in the middle of the store and then of course any figures, models, and toys were on the right side wall. I loved that place. For a few years even had my own box, where they would pull your comics for you so you wouldn't have to go searching for them every week.

Where were you in your life during the '90s?

I was in high school and college. Mt Eden High School and Cal State University Hayward. 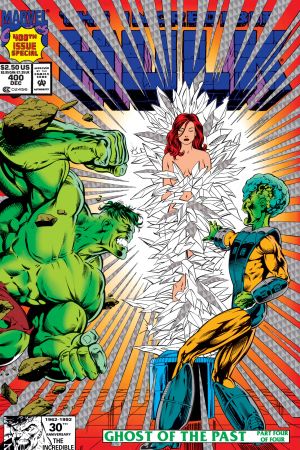 What do you remember about the 1990s overall when it comes to pop culture?

I remember bright colors, baggy pants, airbrushed overalls, high top fades, and a strong sense to find your identity within your culture but at the same time trying to find your own. Hip Hop was a baby and was working its way into being embraced by mainstream society. Michael Jackson was bad but LL Cool J was awesome.

What were your favorite Marvel comics of the '90s?

I was just getting into it as far as having a steady flow of material through my friend Jon. It wasn’t until the mid/late '90s I had enough money to buy my own. Then I was really into trade paperbacks trying to get all the stories. I was just soaking up everything. I was in love with Jim Lee’s art but I loved the X-Men stories. The Spider-Man [Clone Saga] was interesting and confusing but I loved it. Then I found Peter David—one of my favorite writers and his Hulk stories had me hooked.

How would you describe the appeal of Marvel comics during that era?

Everyone was angsty! Just mad at the world and as a teenager it was great. Also it was the decade of the new artists like Jim Lee and Todd McFarlane, two of my favorites. I also felt like the '90s was the decade that the comic nerd was not afraid to show themselves. We were all reading the X-Men books in public proudly and it was fantastic!

How have comics influenced your life personally and professionally?

They have influenced me greatly. I was able to lose myself in this world. I started trying to write my own because I wanted to see if I could create stories like the ones I was reading. Professionally, comics have always had a strong influence on how I carry myself. The way I dressed, I have no shame walking into a room with comic t-shirt. I proudly shout comic nerd to the roof tops. I met comics when I was a kid and they have been with me ever since!

Listen to James weekly on This Week in Marvel, and enjoy the finest comics of the '90s—and seven other decades—with Marvel Unlimited! Then visit Marvel.com's 80th anniversary hub page for more!

Earn Points, Get RewardsJoin NOW!
In this article: This Week in Marvel, Marvel 80th Anniversary