How Norman Osborn Became the Biggest Thorn in Spider-Man's Side

Anyone who thinks the Green Goblin would benefit from a symbiote has some screws loose.

There’s always been some debate about which villain is Spider-Man’s number one bad guy. Doctor Octopus stole Spidey’s life and almost married his Aunt May, while the Jackal created Spider-Man’s clone and countless others. But in our opinion, there has yet to be a Spider-Man villain who can touch Norman Osborn AKA the Green Goblin. His crimes against Peter Parker, Spider-Man are legion.

Even in the midst of ABSOLUTE CARNAGE, Osborn’s evil is ascending in RED GOBLIN: RED DEATH #1. To celebrate the release of this special one-shot, Marvel.com is taking a look back at Norman Osborn’s greatest hits. After this list, there should be no doubt that he’s still the most dangerous Spider-Man adversary of them all.

Green Goblin was one of the earliest Spider-Man villains, and easily one of the most vicious. In the now classic AMAZING SPIDER-MAN #39-40, Osborn’s alter ego trailed Spider-Man long enough to discover that he was really Peter Parker. This led the Goblin to kidnap Peter before unmasking himself as well. It was an evocative encounter that paved the way for their long-running animosity.

This vile act alone should be enough to make Norman Osborn Spider-Man’s most hated foe. In the landmark AMAZING SPIDER-MAN #121-122, Osborn kidnapped Gwen Stacy and threw her off of a bridge. Not even Spider-Man’s sensational powers were enough to save the love of his life. It’s a tragedy that has defined Peter Parker’s life almost as much as the loss of his Uncle Ben. 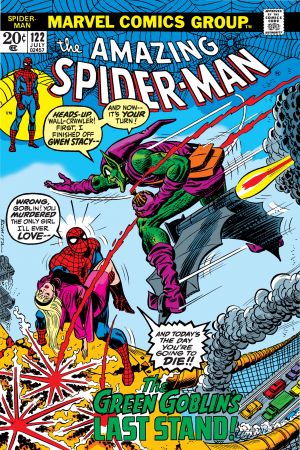 SPIDER-MAN: THE OSBORN JOURNAL #1 recontextualized the CLONE SAGA by revealing that Osborn had been pulling Peter’s strings for many years. In addition to backing Jackal’s cloning experiments, Osborn successfully fooled Peter into believing that he was the clone while Ben Reilly was the one true Spider-Man. This caused an identity crisis that nearly destroyed both heroes.

Do Spider-Man and Mary Jane Watson still have a baby daughter? In one timeline, their little girl May “Mayday” Parker grew up to become Spider-Girl and later, Spider-Woman. However, there wasn’t a happy ending in AMAZING SPIDER-MAN #418 when Mary Jane seemingly lost the baby and one of Osborn’s operatives apparently kidnapped May. We’re still waiting for May to resurface, someday.

In the finale of the CLONE SAGA, Osborn just couldn’t resist showing his face and demonstrating how he had ruined Peter’s life. SPIDER-MAN #75 depicted the showdown between the two heroic Spider-Men and Green Goblin. This was Norman’s first public appearance in years, and he marked the occasion by killing Ben Reilly. Spider-Man survived and emerged triumphant, but Osborn was far from through with Peter Parker. 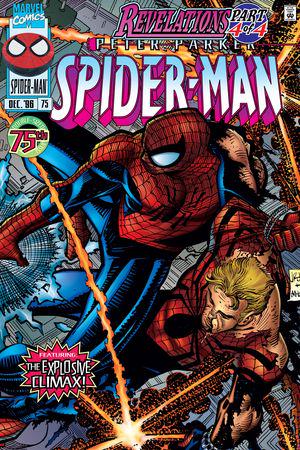 AMAZING SPIDER-MAN #400 gave Aunt May a beautiful sendoff while revealing that she knew about Peter’s double life and approved of his actions. Leave it to Osborn to ruin everything. In SPIDER-MAN #97 and PETER PARKER, THE SPECTACULAR SPIDER-MAN #263, it was revealed that the real Aunt May was Osborn’s prisoner the whole time and she had no idea that her nephew was Spider-Man. The woman who died turned out to be an actress who had been genetically modified to fool Peter. This was truly a cruel stunt and it was also a crushing blow to Peter.

In his own twisted way, Osborn admired Peter. By the time of PETER PARKER: SPIDER-MAN #45-47, Osborn wanted to make Spidey into his heir. To start, he brainwashed Peter into briefly believing that he was the Goblin and sent him after his loved ones. But Osborn didn’t stop there. He put Flash Thompson into a staged “accident” that left him severely injured. Peter eventually understood the Goblin’s ultimate motivation, but that’s no excuse for everything that he did. 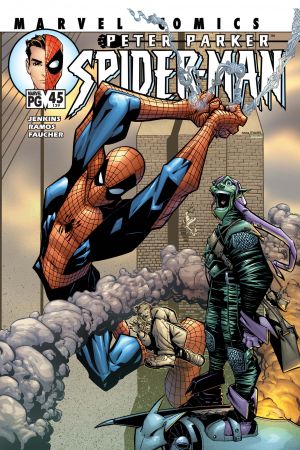 Even from behind bars, Norman Osborn made Peter’s life unbearable. In MARVEL KNIGHTS: SPIDER-MAN #1-12, Osborn orchestrated numerous events, including Aunt May’s disappearance and the rise of a new Venom. However, the final threat included nearly all of Spidey’s toughest villains in one group: the Sinister Twelve. Osborn even tried to recreate the death of Gwen Stacy using Peter’s wife, Mary Jane. But the Parkers are a team, and even Mary Jane had her moment in the final battle.

Setting Up Harry Osborn to Die

By now, it should be no surprise that Norman Osborn is a horrible father as well. In AMAZING SPIDER-MAN #595-599, Osborn essentially blackmailed his son Harry Osborn to don a suit of armor and become American Son. Osborn also teamed up with his lover, Lily Hollister AKA Menace, to make Harry believe that Lily was carrying his child. This wasn’t just a ruse to bring Harry into the Dark Avengers fold, it was part of a plan to set up his death in order to give Osborn more sympathy from the general public. Even the life of his firstborn son was just a bargaining chip for Norman.

The Siege of Asgard

Osborn oversaw the DARK REIGN that put the entire Marvel Universe under his heel. But the cracks in his sanity were very clear by SIEGE #1-4. Osborn framed the Asgardian hero Volstagg for multiple deaths as a pretense to invade Asgard. Countless Asgardians fell in defense of their city, and Osborn even unleashed Void to destroy Asgard’s golden halls in a spiteful move when the battle turned against him.

After a long time away, Norman returned to plague Spider-Man. However, he came to realize that Doctor Octopus had taken over Peter’s life. In SUPERIOR SPIDER-MAN #27-31, Osborn’s Goblin army overwhelmed Doc Ock’s Spidey, and even kidnapped his lover, Anna Maria Marconi. Otto Octavius was so humbled by his defeat that he realized only the real Superior Spider-Man could defeat Osborn. Therefore, Doc Ock willingly returned Peter’s body to him. 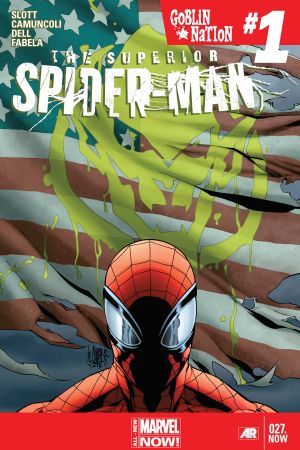 Norman Osborn wanted the edge over Spider-Man and he finally got it when he merged with the Carnage symbiote to become Red Goblin in AMAZING SPIDER-MAN #796-800. Red Goblin proved to be too much for Peter to handle alone, and Osborn really outdid himself this time. He infected his grandson Normie with the Carnage symbiote and he personally murdered Peter’s friend Flash Thompson. Norman came very close to killing everyone Peter loved, and it was only his massive ego that stopped him in the end. Unfortunately, Osborn’s actions only led to his current team up in ABSOLUTE CARNAGE. And he’s once again making Spider-Man’s life a living Hell.

See the latest entry the sinister saga of Norman Osborn in RED GOBLIN: RED DEATH #1, written by Rob Fee, Sean Ryan, and Patrick Gleason with art by Pete Woods, Ray-Anthony Height, Marc Deering, and Dono Sanchez-Almara with Protobunker on colors. Get your copy today online or at your local comic shop!