How is it to live every day seeing the flaws in everyone and everything?

The client, Karnak Mander-Azur, is a self-identified Inhuman and longtime advisor to the Royal Family. Currently he belongs to an Inhuman/S.H.I.E.L.D. collaborative organization known as the Secret Warriors, although I am unclear on whether or not this is a formal designation or a colloquial title adopted by the group. He presents as a man in above average physical health who is noticeable by the facials tattoos that indicate his membership in a religious movement known as the Tower of Wisdom.

Karnak joined the movement after his parents refused to let him undergo the Terrigenesis process due to how the Mists affected his brother Triton. Instead, Karnak studied under the Wisdom monks, learning both philosophy and a variety of martial arts. These studies are credited with his abilities — the client is a master planner who is evidently able to see the flaws in everything including people, objects, and plans — although it is unclear if this is a “power” or just a highly developed skill. It also marks him as distinctly different from the rest of the Inhuman population who undergo exposure to the Mists; while not all react to the gas and change, participation in the process is nearly 100 percent. The combination of his experiences, his skillset, and being this literal outlier often leaves him feeling very separate from others. In therapy, we have also explored if he furthers this sense of separation on his own, choosing it instead of reaching out, but so far the client is fairly resistant to this avenue of discussion.

Karnak has recently undergone some fairly significant life changes. In the first place, in response to knowledge he still has not fully articulated, he ended his own life. Through a process this writer confesses he does not wholly understand, but hinges on another Inhuman that was genetically related to Karnak that could absorb the genetic memories of dead Inhumans, Karnak was reborn. While retaining his memories, he lost his distinctive head shape. While this seems to have cost him nothing, it is worth note as it is significant change to his appearance. 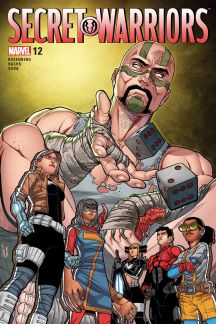 Since his rebirth, he has been far more paranoid, secretive, and withdrawn as well. While being a member of a team, he often seems to be working at odds with their goals or following a very different route without explaining or alerting his teammates to his choices.

Additionally, most of the Royal family, arguably the individuals he is closest to and calls friends and family, have left the planet and did so largely without explanation. While he largely downplays this development on his psyche, for an individual who is slow to trust and has few supports, this sudden loss of so many people from his life has undoubtedly affected him.

Due to his overall hesitance to open up, much of our therapy has been focused on daily coping skills. With his ability to see flaws everywhere, day-to-day life is a series of encounters that scream at him to solve problems that he cannot, for many reasons, starting with the fact that it is impossible to make a person perfect. For another example, it is difficult to get anyone to listen to you when you claim there is a structural flaw in a building that will cause it to collapse in 96 years. We are working on active ignoring, how to evaluate which flaws are fixable and worth focusing on now, which can be delayed, and which, ultimately, must be accepted. Along with this we are working on emotion regulation to help him connect better with others and reduce his susceptibility to anger, disappointment, etc., with normal human failings. Lastly, we have been practicing mindfulness techniques, something the client has taken to very well given his experiences in studies in the Tower of Wisdom.

As part of his therapeutic process, Karnak Mander-Azur has agreed to attend a group session as a kind of exposure therapy for managing his emotions and his reactions to the flaws of others. He will attend Doctors Matthew Rosenberg and Javi Garron’s group starting on January 10, 2018 and information on his progress with be available in file SECRET WARRIORS #12.

In this article: Karnak

The Inhuman adviser is the latest 4-Star Rarity character!

We rank the strongest Inhumans.

Secret Warriors: Not a Flaw

Karnak proves his worth in SECRET WARRIORS #5