This Week in Marvel Universes: A Brief History of 'The End'

Before reading the new one-shots, find out about the first ones!

Last month, a series of one-shots were released featuring the “last stories” of six of Marvel’s most celebrated characters. But this isn’t the first time the House of Ideas has pondered THE END… On the most recent episode of This Week in Marvel, Ryan “Agent M” Penagos and Lorraine Cink took a deep dive into the previous THE END books (as well as their alternate universes)!

THE END began with 2002’s INCREDIBLE HULK: THE END by Peter David and Dale Keown! Editor Bobbie Chase reached out to writer Peter David and said “Marvel was going to be producing a line of books designed to be the final story of various characters, produced by creators associated with those characters. Dale Keown was on board, and she wanted to see if Peter would be on board to write it since they both had impactful times on Incredible Hulk.  Peter had actually already written it!

INCREDIBLE HULK: THE END was adapted from a 12-page prose story by Peter David from a 1998 short story collection he edited called The Ultimate Hulk. The title of INCREDIBLE HULK: THE END is “The Last Titan,” the same title of the short story from which it’s adapted. The original story even had an accompanying illustration by legendary artist George Perez, who’d drawn another dystopian Hulk story with Peter, “Future Imperfect.”

Peter said he’d already done the story they were talking about, but he jumped at the chance to adapt the original tale and make it more visual and add/expand on things—such as Bruce Banner’s conversation with a Rigellian Recorder. The overall story remains the same: Hulk AKA Bruce Banner is seemingly the last person alive on Earth after nuclear war devastated the entire planet—or at least all the parts Hulk has seen traveling the Western hemisphere. He eats some cactus and gets torn to shreds by giant, irradiated cockroaches. It’s bleak and sad and pretty incredible (pun intended). The book became a smash hit, selling out very quickly.

Throughout the decade, more THE END stories would be released, some as one-shot stories such as PUNISHER: THE END, IRON MAN: THE END, and SPIDER-GIRL: THE END!; some as multi-issue limited series—MARVEL UNIVERSE: THE END, WOLVERINE: THE END, and FANTASTIC FOUR: THE END; and even an 18-issue story across three volumes—X-MEN: THE END.

Thinking back to Bobbie Chase’s initial concept of the “final story of various characters, produced by creators associated with those characters,” we got Jim Starlin’s Thanos tale in MARVEL UNIVERSE: THE END. Chris Claremont (with Sean Chen) gave his final word on the X-Men; Paul Jenkins (writer of ORIGIN) connected Logan’s beginnings to WOLVERINE: THE END; lauded PUNISHER writer Garth Ennis took Frank Castle to the bitter end; Alan Davis puts the Fantastic Four through the physical and emotional wringer; David Michelinie and Bob Layton told one more Iron Man story; and Tom DeFalco, Ron Frenz, and Sal Buscema gave a big finale to Spider-Girl and the MC2 universe… for a while.

These stories are all alternate reality tales, and thus have numerical Omniversal designations! Let’s run ‘em down!

Don’t know where to start reading? Ryan and Lorraine have their favorite THE END issues to recommend!

Written and drawn by Jim Starlin with Al Milgrom on inks

A pharaoh gets cosmic power and tries to take over everything throughout all of time so Doom and Thanos try taking him down.  Thanos is the unreliable narrator throughout the series, which feels like a love letter to Thanos. There are tons of splash pages featuring even more heroes. Starlin could only convince an artist to do that by doing it himself. As THE END goes, this one is weird, fun, and delightfully cosmic. 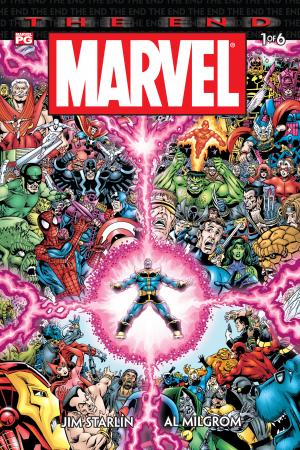 Written by Garth Ennis with art by Richard Corben

Richard Corben is a MASTER of horror comics, monsters, and grimy and gritty stories, and this is the grimiest and grittiest. Frank Castle has been imprisoned in Sing Sing where his punishing never really slowed down. When World War III kicks off, he’s one of the only people left alive in the prison and able to stay safe from the radiation in the prison’s fallout shelter. A year after the bombs fell, old man Castle (along with another survivor) bust out of the shelter and head for New York City to go after the people who destroyed the world. It’s part dark road trip, part Punisher unleashed, part commentary on the world, all wrapped up in some of the most visceral, brutal, haunting artwork Marvel has published. And it’s a MAX title, so there are NO punches pulled.

After no THE END stories for nearly a decade, it all changes in 2010 thanks to the fine work of editors Jordan D. White and Chris Robinson when they released SPIDER-GIRL: THE END! written by Tom DeFalco with art by Ron Frenz. The duo has been in charge of the six THE END one-shots that have released this year, making this issue a perfect way to set the mood for the new stories.

Want to hear the whole conversation? Download the latest episode of This Week in Marvel below!

With new episodes every Friday, This Week in Marvel delivers all the latest Marvel discussion and news about comics, TV, movies, games, toys, and beyond! Tweet your questions and comments about the show to @AgentM or @Marvel with the hashtag #ThisWeekinMarvel!