Jack Kirby: A to Z

Kirby creations for every letter of the alphabet!

Last year on This Week in Marvel, Ryan “Agent M” Penagos came up with an alphabetical list to celebrate the birthday of Jack Kirby. It was so much fun that he did it again! Here are 26 highlights of the career and creative contributions of Jack “The King” Kirby – one for each letter of the alphabet!

Absorbing Man, JOURNEY INTO MYSTERY #114, January 1965: Carl “Crusher” Creel obtained the power to absorb the properties of anything he touches thanks to a magic potion courtesy of Loki. He’s a big bad bald boy with a bangin’ ball and chain.

Batroc the Leaper, TALES OF SUSPENSE #75, December 1965: George Batroc is a long-time foe of Captain America – a mercenary, a Frenchman, a master of savate (French kickboxing) and acrobatics.

Celestials, ETERNALS #2, May 1976: Celestials are massive cosmic beings created by the first iteration of reality AKA the First Firmament because it was lonely and wanted friends. They do experiments around the universe with planets and other beings and get involved in big, big, big cosmic events. 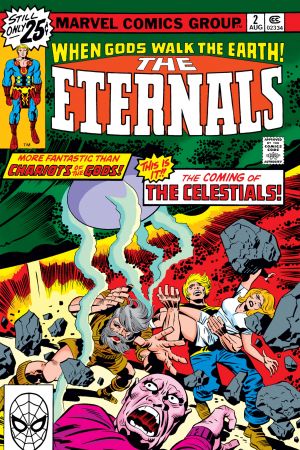 Deviants, ETERNALS #1, April 1976: Created by Celestials through Earth-based experiments, the Deviants are cousins of a sort to humans and Eternals. Kirby described them in the first issue of ETERNALS as “an ever-changing and destructive failure. Structurally unstable, each new generation of Deviant appeared in new and monstrous ways. His lot was constant war.”

Eternals, ETERNALS #1, April 1976: Created from experiments performed on ape-like ancestors of humanity in much the same way as the Deviants, Eternals are cosmically powered. From that issue: “The Eternal! He was more a child of the gods than of Earth… he reached for the universe! The Eternals bred few in number and were immune to time and death! Like the gods, they lived apart from all other living beings.”

Fin Fang Foom, STRANGE TALES #89, July 1961: One of Kirby’s pre-Fantastic Four monsters who made the leap into the Marvel Age, Foom is a big alien dragon who wears little pants and is the BEST. He Whose Limbs Shatter Mountains and Whose Back Scrapes the Sun!!

Galactus, FANTASTIC FOUR #49, January 1966: The devourer of worlds, as much a universal force and necessity as a being, Galactus was the sole survivor of the previous universe and now likes to munch.

High Evolutionary, THOR #134, September 1966: Herbert Edgard Wyndham was a scientist with a BONKERS history. He evolved himself beyond regular humanity, has a suit of armor, created half-animal/half-human beings called New Men, created a replica of Earth called Counter-Earth on the opposite side of the Sun, and has had dealings with elder gods, Asgardians, and so much more. BONKERS, I SAY.

Juggernaut, UNCANNY X-MEN #12, May 1965: Charles Xavier’s rough and tumble step-brother Cain Marko was in the military when he—along with Charles—came upon a temple to the ancient god Cyttorak. Grabbing a mystical crimson gem in the temple turned Cain into Juggernaut, a nigh unstoppable force of destruction and rage. 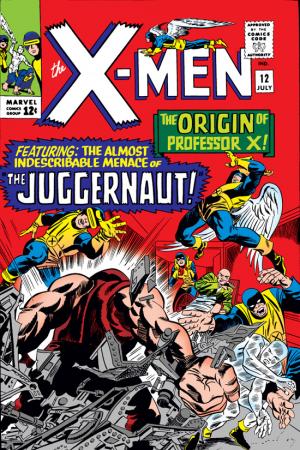 Karnak, FANTASTIC FOUR #45, September 1965: A member of the Inhuman royal family (and Black Bolt’s cousin), Karnak actually never went through the process of Terrigenesis. His ability to see the weakness in anyone or anything is part of who he is.

Loki, JOURNEY INTO MYSTERY #85, August 1962: You know Loki. He’s the god of mischief, and one of the most beloved Marvel characters, both as a terrifying villain, or misunderstood reality savior, or Thor’s frost giant brother, or any number of roles he’s inhabited.

Machine Man, 2001: A SPACE ODYSSEY #8, April 1977: Machine Man AKA X-51 AKA Aaron Stack was one of a number of robots created to be weapons. But he was raised with a sense of humanity and became a hero. That said, he’s not very fond of fleshy ones.

Nezarr the Calculator, ETERNALS #9, December 1976: Each of the 2,000-foot-tall Celestials has a function and a role within the group, and Nezarr is the data dude of the group. He takes in information from the other Celestials and their experiments and actions, and maths it up for big boss Arishem the Judge.

Orrgo, STRANGE TALES #90, August 1961: In his first appearance, Orrgo, a large alien conqueror, took over all of humanity, got sleepy, fell asleep at the circus, and was seemingly killed by an angry circus gorilla. But he was fine. He later joined a squad of the Howling Commandos in a non-field support capacity.

Quicksilver, UNCANNY X-MEN #4, January 1964: Twin sister to Scarlet Witch AKA Wanda Maximoff, Pietro Maximoff can run fast. Very fast. VERY, VERY FAST. The twins were believed to be the mutant children of Magneto raised by humans, but it was later revealed they actually got their powers from experiments by the High Evolutionary.

Ransak the Reject, ETERNALS #8, November 1976: Considered disfigured and horrifying to his fellow Deviants because of his handsome looks, Ransak is an incredible fighter and a dangerous member of the race. But Ransak is best friends with my favorite Deviant—the monstrous Karkas.

Supreme Intelligence, FANTASTIC FOUR #65, May 1967: A massive supercomputer made up of the greatest minds of the Kree, Supremor charts the course for the Kree race. He’s also a giant green tentacle head in a jar.

Two-Gun Kid (Matt Hawk/Hawkins/Liebowicz), TWO-GUN KID #60, August 1962: The Two-Gun Kid was a Timely Comics-era character who was reinvented by Kirby in the Marvel Age as a more fantastical Super Hero-style gunslinger. Kid even traveled through time and hung out with the Avengers for a while. He has a horse named Thunder and a partner named Boom Boom Brown. 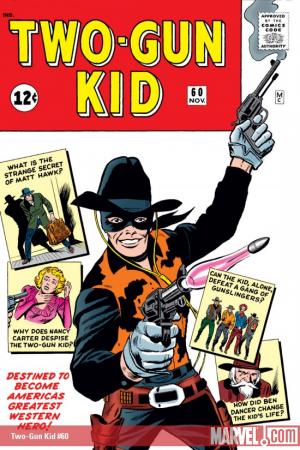 Uatu the Watcher, FANTASTIC FOUR #13, January 1963: The Watchers are an advanced race who messed up by giving technology to another race who wasn’t ready for it, and they pretty much destroyed themselves. So the Watchers vowed to never again interfere, just to observe and record and… watch. Uatu is the Watcher who looks over Earth. Also, he’s the WORST at not interfering.

The Vision (Aarkus, Golden Age), MARVEL MYSTERY COMICS #13, September 1940: An interdimensional hero of justice, Aarkus came to Earth to help humanity fight evil. With his powers over smoke and gas and more, he joined the Invaders, fought ratzis, and was an original Timely Comics character. His look inspired the synthezoid Vision who was created in the Avengers comics of the ‘60s.

The Wasp, TALES TO ASTONISH #44, March 1963: Janet Van Dyne became the Wasp and fought alongside Ant-Man, originally to avenge her father. She later helped form—and name—the Avengers and has led the team, been a corporate leader, and world-renowned fashion designer.

Professor Xavier, X-MEN #1, July 1963: The famously bald gentleman with mega mental abilities who teaches kids how to develop their mutant powers and fight. He’s been dead a few times. Now he’s not!

Yancy Street Gang, FANTASTIC FOUR #15, March 1963: A buncha hooligans from the neighborhood where the Thing grew up, the Yancy Street Gang was Ben Grimm’s crew for a while, but has tormented, teased, and pranked Ben for years since he got out of the racket. Yancy Street is based off the Lower East Side of New York City where Kirby grew up, so maybe he had a Yancy Street Gang of his own…?

Arnim Zola, CAPTAIN AMERICA #208, January 1977: A twisted biochemist and genetic experimenter, Zola gained knowledge from the Deviants and was welcomed by Red Skull to help further his goals during World War II. He uploaded his consciousness into a robot body to survive long after his human body would have survived.

And that’s this year’s Jack Kirby: A to Z! Stay tuned to Marvel.com for more about Jack “The King” Kirby and all of Marvel’s legendary creators!