This Week in Marvel History: November 22-28

With Marvel celebrating its 80th anniversary this year – and to scratch my own history and research itches – every week I’m digging through a whole host of important dates and details for a special segment of This Week in Marvel called… (wait for it) … This Week in Marvel History! Important comics, storylines, character appearances and moments, real world releases and special Marvel milestones—it’s all part of TWIMH! Here are just a few Marvel History notes for the week of November 22-28!

1983: Cypher AKA Doug Ramsey debuted in NEW MUTANTS #13 by Chris Claremont and Sal Buscema. He and Kitty Pryde hung out and did some classic hacking, finding themselves getting into some government systems. We didn’t know it from his debut, but Doug has the awesome mutant power to understand and decipher any language or code.

2017: Cosmic Ghost Rider debuted in the first part of “Thanos Wins” from THANOS #13 by Donny Cates and Geoff Shaw. CGR, a future Frank Castle who made a deal with the devil, became the Herald of Galactus, and worked for an old King Thanos!

1971: MARVEL PREMIERE #1 by Roy Thomas and Gil Kane was a huge one! It’s a reboot of sorts for Him, the golden ultimate human who debuted in FANTASTIC FOUR and fought Thor a bit. He was in his li’l cocoon for much of the issue, communicating with the High Evolutionary. Eventually, he emerged and helped the High Evolutionary fight off the nasty Man-Beast. Over the course of the issue, High Evolutionary created Counter-Earth, a duplicate of Earth on the complete other side of the Sun. Counter-Earth was meant to be a peaceful, good planet without the wars and hatreds of main Earth, but Man-Beast mucked it up and corrupted it. Him decided to go down to this new planet and was christened Warlock AKA Adam Warlock by the High Evolutionary, who gave Warlock the a green gem to help him in his quests and battles. This would end up being the Soul Gem, the first appearance of any Infinity Gem in Marvel Comics publishing.

1993: Vance Astrovik, formerly known as Marvel Boy, adopted the hero name of Justice in NEW WARRIORS #43 by Fabian Nicieza and Darick Robertson. Vance had been in the supermax prison known as the Vault after accidentally killing his abusive (and abused) father, and after spending time in prison, chose a moniker and outlook reflecting his thoughts on criminal justice and rehabilitation.

2016: A Thanksgiving-themed issue of SPIDER-GWEN #14 by Jason Latour, Robbi Rodriguez, and Chris Visions added some holiday spirit and introspection to Gwen Stacy’s adventures with her family and friends across two universes. 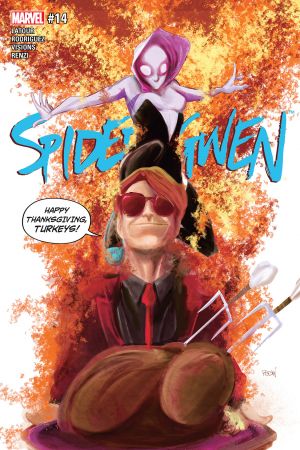 A family’s already difficult Thanksgiving was made harder when they took in an injured Punisher in the November Infinite Comic from 2016’s A YEAR OF MARVELS series. Trouble followed Frank into the family’s home, and they had to scramble to stay safe. Written by Todd and Elliott Casey with art by Paul Davidson, it’s an intense, heartbreaking, and satisfying Punisher story.

2004: NEW AVENGERS #1 by Brian Michael Bendis and David Finch picked up the saga of Earth’s Mightiest Heroes six months after the devastating events of “Avengers Disassembled”—Scarlet Witch’s turn and the deaths of Hawkeye, Vision, and Ant-Man—in a world without the Avengers. This issue, and the first arc, saw a massive breakout of villains from the Vault prison—which led to the formation of a new Avengers squad. This issue ended with a HUGE reveal. Super fun!!

1975: We got our first shadow appearance of Lilandra in UNCANNY X-MEN #97 by Chris Claremont and Dave Cockrum. She came to Professor X in a weird dream. Lilandra Neramani was the Majestrix, or Empress, of the Shi’ar Empire and definitely Charles Xavier’s OTP.

1973: The first appearance of the Spider-Mobile in AMAZING SPIDER-MAN #130 by Gerry Conway and Ross Andru! Johnny Storm helped build Spider-Man a jeep/buggy/Spidey hybrid vehicle and they took it out on the town this issue. It shoots webs! And is ridiculous and beloved! Also, Aunt May stood at the wedding altar with Doctor Octopus by the end of the issue! DUN DUN DUNNNN!

1984: Legion debuted at the end of NEW MUTANTS #25 by Chris Claremont and Bill Sienkiewicz in a single-page prologue to the next issue. David Charles Haller is the son of Charles Xavier and Gabrielle Haller, the Israeli ambassador to Great Britain—but until this first story, his existence had been unknown to Xavier. We learned a bit about Legion’s powers, personalities, and maladies. There’s also a great pin-up/journal entry on mutant-thief-intergalactic-rock-star Lila Cheney and a story with Cloak and Dagger in this issue!

1972: Mimic AKA Calvin Rankin seemingly died in INCREDIBLE HULK #161 by Steve Englehart and Herb Trimpe. It’s a pretty sad story, with Calvin Rankin’s powers of duplicating others’ abilities out of control—he’s absorbing people’s energies and more, and thinks he’ll soon be so out of control that he’ll absorb the life force of everyone on the planet. Beast tried to help Cal, but Hulk got (angrily) involved. Mimic decided to absorb the Hulk’s gamma radiation and give up his life. Mimic wasn’t fully dead, and thanks to mimicking Wolverine, he came back fully thinking himself to be Wolverine, slightly more mentally unstable, and still very mad at Hulk. That happened nearly 20 years later in the pages of MARVEL COMICS PRESENTS.

1995: The Wasp AKA Janet Van Dyne emerged from her cocoon, sporting a new insect-like form in AVENGERS #394 by Bob Harras, Terry Kavanagh, Ben Raab, and Mike Deodato. Janet had been gravely injured the issue before in a battle with… Iron Man? Yup! It’s a whole thing. Anyway, “insect Wasp” lasted until the Onslaught saga.

2007: Hope Summers debuted in X-MEN #205 by Mike Carey and Chris Bachalo. This is Chapter Five of “Messiah CompleX,” the mega X-over focused around the first mutant born since the events of M-Day. That mutant was Hope Summers, who’d been kidnapped and hunted since the event started. In this issue we finally saw her – and the person who took her. 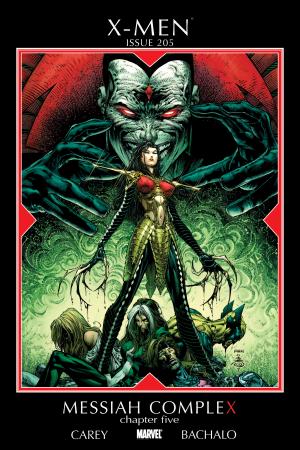