With Marvel celebrating its 80th anniversary this year – and to scratch my own history and research itches – every week I’m digging through a whole host of important dates and details for a special segment of This Week in Marvel called… (wait for it) … This Week in Marvel History! Important comics, storylines, character appearances and moments, real world releases and special Marvel milestones—it’s all part of TWIMH! Here are just a few Marvel History notes for the week of September 20-September 26!

1977: Wendell Vaughn made his first appearance in CAPTAIN AMERICA #217 by Roy Thomas, Don Glut, and John Buscema. Wendell’s most well-known persona is Quasar, protector of the universe and close confidante of the weird cosmic entity Eon. But in his first appearance, he took on the identity of Marvel Boy—the Atlas-era Super Hero—and is part of a team of S.H.I.E.L.D. Super Heroes. Texas Twister, Vamp, and Blue Streak are also on the squad, the latter two of which also debuted this issue. Blue Streak? SO FEARSOME WITH HIS ROLLER SKATES. 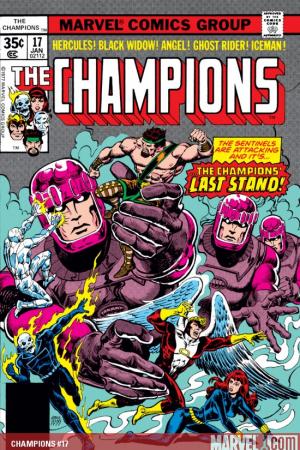 1977: Roy Thomas, Gerry Conway, and Mike Ploog introduced Werewolf by Night in the pages of MARVEL SPOTLIGHT #2. Jack Russell is a young man who inherited a condition from his birth father… the condition of lycanthropy! He’s a werewolf!

1987: X-FACTOR #24 by Louise and Walter Simonson introduced a new version of one of the original X-Men, taking the de-winged Angel and introducing the ferocious Horseman of Death, Archangel. Sporting one of the coolest designs in Marvel history, Archangel joined Apocalypse and his other Horsemen to take down X-Factor quickly and decisively. 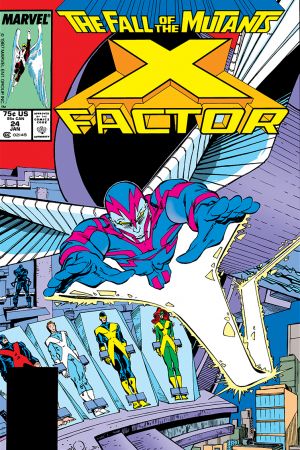 In FANTASTIC FOUR #310, Ben Grimm and Sharon Ventura were battling the electronic bad guy Fasaud in space when they were bombarded by cosmic rays—similar to those that first gave the Fantastic Four their powers. Thing mutated into his spikey rock form, and Ms. Marvel mutated into She-Thing, very similar to Ben’s original transformation.

1975: Moira MacTaggert debuted in UNCANNY X-MEN #96 by Chris Claremont, Bill Mantlo, and Dave Cockrum. Only a few issues into the All-New, All-Different run and things were getting wild! The team had just formed and seen a major loss after Thunderbird’s death, but this issue introduced one of the longest-lasting—and seemingly most important—figures in X-Men history. She was introduced as someone who was hired to take care of the house for Charles Xavier, but ended up running into battle with demons—the N’Garai, which are also introduced in this issue—machine gun in hand. Moira would turn out to be one of the world’s most gifted geneticists, and if you’re reading HOUSE OF X and POWERS OF X, much, much more.

1980: The mighty team of Chris Claremont and Frank Miller introduced Xi’an Coy Manh AKA Karma in MARVEL TEAM-UP #100 featuring Spider-Man and the Fantastic Four. It was a heavy issue, dealing with Xi’an and her siblings’ origins in Vietnam, deeper family issues, mind-control, possession, escaping war and oppression, and more. Karma later went on to join the New Mutants. There’s also a backup story by Claremont and John Byrne about Storm and T’Challa’s connection, which I believe is the first story detailing that history.

1998: The Marvel Knights rollouts continue! BLACK PANTHER #1 by Christopher Priest and Mark Texeira was released. Priest and his collaborators redefined who and what the Black Panther would mean to the Marvel Universe in this series, and it all began here! The Dora Milaje, specifically Okoye and Nakia, as well as T’Challa’s advisor/warrior Zuri were first introduced in this issue. And Priest brought in Everett K. Ross, whom he had introduced a few months prior in the pages of KA-ZAR, to act as a liason to T’Challa as well as a POV character for readers.

2008: Lady Bullseye debuted in DAREDEVIL #111 by Ed Brubaker and Clay Mann. A deadly assassin working for the Hand, Lady Bullseye later went on to kill and resurrect some of Daredevil’s allies as part of her plans for the Hand. Speaking of DD, ol’ Matt Murdock hooked up with detective Dakota North in this issue.

1944: We may know her as Hellcat these days, but Patsy Walker goes WAY back to the early days of Marvel—then Timely—Comics, and made her debut in the pages of MISS AMERICA MAGAZINE #2 by Bessie Herman Little and Ruth Atkinson.

1979: UNCANNY X-MEN #129 was released, which is, for my money, one of the most important issues in Marvel Comics history. It’s part of the legendary X-MEN run by Chris Claremont and John Byrne. It’s the first official part of the Dark Phoenix Saga. It’s the first appearance of Emma Frost—villain, hero, teacher, leader, icon. It’s the first appearance of Kitty Pryde, one of greatest X-Men characters of all time. Plus, there are the teases of the Hellfire Club, Sebastian Shaw, Donald Pierce, the Massachusetts Academy, and more.

1996: Heroes Reborn continues with the launch of the AVENGERS title by Rob Liefeld, Jim Valentino, and Chap Yaep.

2002: The Chitauri were first introduced in ULTIMATES #8 by Mark Millar and Bryan Hitch. In the Ultimate Universe, they’re more of a shape-shifting and stealthy race like the Skrulls rather than the brutal, interstellar warring race in the main Marvel Universe.

1943: One of Marvel’s earliest female Super Heroes Miss America was introduced in MARVEL MYSTERY COMICS #49. Madeline Joyce gained her powers of flight and super strength from lightning channeled through an advanced piece of technology. She later fought alongside Captain America, Namor, and others as part of the All-Winners Squad.