by Marvel
Today in Marvel History: The Defenders First Appearance

On July 20, 1971, the Defenders, one of Marvel's most unlikely super teams came together to defeat a massive weapon by a dying villain. In MARVEL FEATURE (1971) #1, Doctor Strange paid an in-person visit to Namor and then an astral visit to the Hulk to bring them together to stop the Omegatron, a doomsday device set off by evil scientist Yandroth. Namor tried summoning the Silver Surfer, but he was in no condition to join this fight.

The thing is, none of these heroes were too keen on working with each other. But since the Omegatron was no joke, it required a powerful, magical combination of Super Heroes to get the job done.

In the end, Doctor Strange, Namor, and the Hulk were able to use their individual talents and powers to stop the doomsday device from going off. They even came together long enough to come up with a name -- the Defenders!

While it wasn't the most natural grouping, the Defenders continued to fight together in their own series the following year (with the Silver Surfer by their side) Over the years, the Defenders lineup would change, eventually bringing together Jessica Jones, Daredevil, Iron Fist, and Luke Cage -- a lineup that was reflected in the Netflix series Marvel's Defenders. 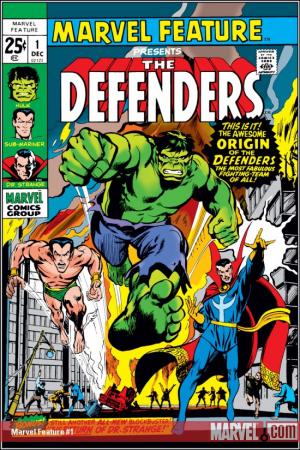 You can read MARVEL FEATURE (1971) #1 -- edited by Stan Lee, written by Roy Thomas, art by Ross Andru, inks by Bill Everett, and lettering by Sam Rosen -- on Marvel Unlimited today! Then head to Marvel's 80th anniversary hub page for more from the history of the House of Ideas!

In this article: The Defenders, Marvel 80th Anniversary

Al Ewing and Javier Rodríguez Reunite for More Cosmic Madness in 'Defenders: Beyond'

New team and new threats await in an all-new 'Defenders' series this June.