Revisit some classic 'Fantastic Four' and 'What If...?' mags!

The Fantastic Four are Marvel’s First Family of Super Heroes. And once you’re in this family, you’re in for life.

But there have been multiple iterations of the squad over the years—beyond Reed, Sue, Johnny, and Ben. And one of the most memorable arrived when Spider-Man, Wolverine, the Hulk, and Ghost Rider joined the team in an unforgettable three-part adventure by writer Walt Simonson and artist Arthur Adams.

In FANTASTIC FOUR (1961) #347, Simonson and Adams introduced the Skrull villainess, De'lila, who used her shapeshifting and telepathic abilities to either seduce or entrap the entire FF. She then assumed the form of Susan Richards and played the grieving widow as she recruited a dream team of Marvel heroes: Spider-Man, Wolverine, Hulk, and Ghost Rider. At the time, Bruce Banner’s alter-ego was rocking his grey skin as Joe Fixit, while the Danny Ketch Ghost Rider was blazing a trail in the Marvel Universe.

The cover’s tagline jokingly called the issue “The World's Goofiest Comic Magazine!” For issue #348, that blurb was changed to "The World's Most Commercialest Comic Magazine!" This was the issue that gave the new FF a chance to feel each other out as a team as they traveled to Monster Island. Spider-Man had some trouble adjusting to the rough edges of his teammates, and said "this is too much like having a couple of older, meaner brothers!" But the dynamic between the new FF was undeniably fun. 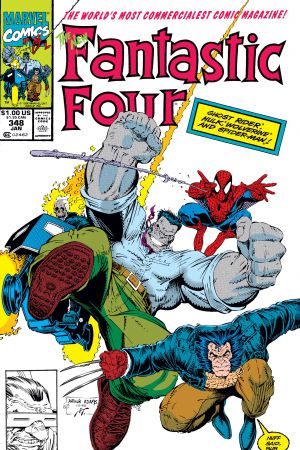 Meanwhile, De'lila revived Reed Richards and blackmailed him into aiding her while leaving the rest of the original FF in a bit of a bind. However, Reed’s mind is always working, and he set in motion his family’s salvation with a few well chosen words. He also let De'lila believe that he was falling for her.

Issue #349 brought both FF teams together in “The World's Most Collectable Comic Magazine!” As a capper, there was also a last page cameo by the Punisher. But even Frank Castle knew he wasn’t needed when he saw the two teams assembled. Spider-Man proved to be the one hero who could talk the Mole Man down from his rage, while the rest of the heroes subdued De'lila and the Skrulls that pursued her. Ghost Rider even used his Penance Stare on De'lila, to make her feel the pain of her victims. But with the original FF back in action, there wasn’t a need for the dream team to stay together.

Regardless, FANTASTIC FOUR (1961) #374 reunited the new FF as members of Doctor Strange’s Secret Defenders. Coming into the issue, Johnny Storm was wanted by the law for losing control of his Human Torch power during an attempt on his life. Note that Professor Hulk had taken over Banner’s body by this point, but the rest of the new FF remained the same. Spider-Man wanted to bring Johnny in gently, since they’ve been friends for years; unfortunately, the Web-Head’s teammates didn’t get the memo. During the battle, Wolverine savagely scarred the Thing’s face. Those scars remained for over three years, until FANTASTIC FOUR (1961) #414, but it took a little longer for the Thing to forgive Logan for that serious lapse in judgment. 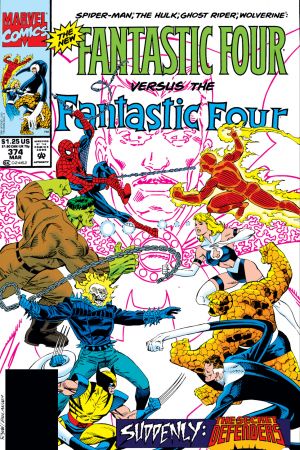 WHAT IF...? (1989) #78 introduced an alternate world in which the FF really was killed during the events of FANTASTIC FOUR (1961) #349. Out of grief and obligation, the New Fantastic Four stayed together in this timeline. Spider-Man’s wife, Mary Jane Watson, even moved into Four Freedoms Plaza as an unofficial member of the team. Meanwhile, Bruce Banner assisted the team during the daylight hours, while Joe Fixit, AKA Grey Hulk, remained in control during the nights.

It was truly priceless to see the expressions on the faces of Doctor Octopus and his Sinister Six when they saw that Spider-Man had backup. Unfortunately, an incarnation of the Frightful Four came very close to killing the new FF. Only the intervention of Doctor Doom allowed them to survive. But that loss left them so demoralized that the new Fantastic Four disbanded in the end.

But in the Multiverse, there’s always a reality where things played out differently. WHAT IF THIS WAS THE FANTASTIC FOUR? (2008) #1 revisited the concept of the new Fantastic Four staying together. This special one-shot was a tribute to Mike Wieringo, the late artist who finished only a handful of pages from this tale before his passing in 2007. Writer Jeff Parker completed the story alongside a phenomenal lineup of Wieringo’s colleagues and friends: Art Adams, Paul Renaud, Stuart Immonen, Cully Hamner, Alan Davis, Casey Jones, David Williams, Sanford Greene, Humberto Ramos, Skottie Young, Mike Allred, and Barry Kitson.

There were a few key differences in this incarnation of the team. For example, Johnny Blaze was the Ghost Rider, and not his younger brother, Danny Ketch. Additionally, the Frightful Four featured Sandman, Venom, Sabretooth, and the Abomination, all of whom were supernaturally empowered by Doctor Doom and Mephisto. This time, the new FF triumphed and remained together as a team.

WHAT IF? (2008) #1 revisited that world as Paul Tobin and artist Patrick Scherberger advanced the timeline to Thanos’ “snap” in INFINITY GAUNTLET. Ghost Rider disappeared alongside half of the universe. But Iron Man, AKA Tony Stark, remained and took Ghost Rider’s place on the new FF. Additionally, the battle with Thanos left Bruce Banner and Hulk permanently separated and free of each other. 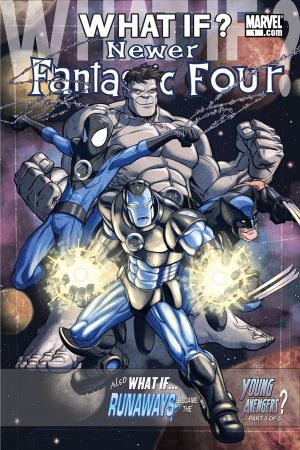 Even the might of the new FF combined with Silver Surfer, Adam Warlock, and Doctor Strange couldn’t defeat Thanos. But Wolverine played the long game by winning Thanos’ trust before removing the Gauntlet from the Mad Titan's hand with a well-timed swipe of his claws.

FANTASTIC FOUR (2018) #3-4 reunited every previous member of the team, including the four members of the new FF. Spider-Man had actually joined full time in FF (2011) #1, when Johnny was lost and presumed dead in the Negative Zone. But these issues further solidified the idea that the new FF would always be a part of the extended Fantastic Four family. And in times of crisis, it’s always good to know that the world’s greatest Super Heroes have equally fantastic members waiting in the wings.