Our Complete Comics Guide to 'X-Men: The Animated Series’ S1 on Disney+: Part 2

The second part to our Season 1 breakdown! Watch the X-Men cartoon that influenced a generation.

START WITH THE FIRST PART TO OUR SEASON 1 GUIDE!

The entire 76-episode run of ‘X-Men: The Animated Series’ is up on streaming hub Disney+, so you can revisit, re-enjoy, or watch this influential cartoon for the very first time! Running from 1992-1997, X-Men: ‘TAS’ now spans the globe with billions of views, and is praised for both its faithful and complex storylines, plucked from decades of comic book lore.

And, mega-fans and newbies rejoice! We’ve hand-picked the very same comics that inspired each episode, all available to read in Marvel Unlimited!

Under the residence and tutelage of telepath Professor Charles Xavier: Wolverine, Cyclops, Storm, Rogue, Gambit, Beast, Jean Grey and youngest member Jubilee, devote their lives as X-Men. Beings born with remarkable power, they protect a world that hates and fears their existence. But despite all that, they’re still committed to peace.

We’ve covered Episodes 1-4 here, but now you can continue with the middle chunk of S1, covering Episodes 5-9, as the X-Men’s uphill battle against the Mutant Control Agency reaches a new low.

But this is only the second part to our epic crawl, so stay tuned for our final Season 1 breakdown wrapping up Episodes 10-13 this week… as well as our article series breaking down Seasons 2-5.

“Captive Hearts” refers to two themes here—the love triangle that’s taking shape between Jean Grey, Cyclops and Wolverine, and Storm’s claustrophobia, a side effect of a childhood trauma, and one that’s beginning to impact her ability to lead.

The introduction of the underground mutant Morlocks is the perfect opportunity for Storm to confront those fears. Shunned by society and forced to live in subterranean squalor, the Morlocks, led by the unflinching Callisto, represent everything the X-Men fight for—the chance for even the most mutated to find acceptance.

While out on a date, Scott and Jean are set up to rescue young Morlock Leech, really a ploy to get them to battle a slew of other Morlocks in a Subway station. Still in civvies, Scott and Jean are taken hostage after being zonked out by the mind-controlling “Annalee.”

Cyke awakes without his visors, (a side effect of Leech’s mutant-suppressing powers), and is hauled before the Morlock’s leader, Callisto. In a dehumanizing barter, Callisto offers Jean Grey’s life in exchange for Scott’s service as her “consort”—this queen needs to make an heir. Jean wriggles free long enough to rebuke this nonsense, and to send out a psychic distress call…

Here’s where Storm struggles, then shines. Wrangling Wolverine, Rogue and Gambit, her rescue team goes headfirst into the sewers, all the while tracked by Morlocks with the home-field advantage. And after an epically-scored racket, Storm pitches an ultimatum to Callisto: a one-on-one lightsword duel for Cyclops, plus leadership of the Morlocks.

This is a turning point for our leader—she now knows that she can weaponize her fear.

Issue #169 marks the first appearance of the Morlocks, and you’ll recognize quite a few faces from the episode! Here, it’s Angel who’s been kidnapped as Callisto’s “groom,” but the premise is the same. Read through #170 to see Storm and Callisto’s savage shiv duel, a now-iconic moment in X-Men history.

The Marauders, a mutant hit squad, are hired by a shadowy employer to wipe out the entire Morlock community in New York’s underground. Try the event in full. 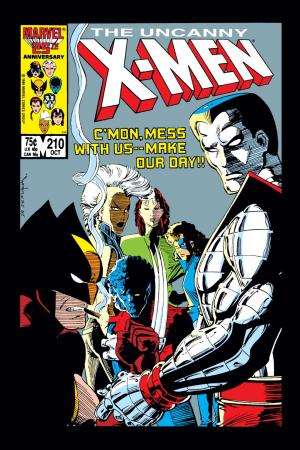 Still in the pits over Jean and Scott, Wolverine takes a solo journey to the Canadian arctic to let his berserker flag fly.

Mortal nemesis Sabretooth is a bloodhound to Logan’s trail though, and it isn’t long before an impressive slash-n’-dash battle takes place across the wasteland. After being dumped in a freezing ocean, Logan’s rendered unconscious. Thankfully, he’s rescued by a small indigenous village that adopts him into its daily rigor, routine and community. It looks like Wolverine’s found peace at last…

This is an extraordinary Wolverine/Sabretooth showdown. It delves deep into their long-seeded feud. See what the Saturday morning censors couldn’t show you while Sabretooth is a “guest” at the mansion.

In which Storm, Jubilee and Gambit take a vacation from hell. Plus, we meet Cable!

Chasing rumors of a “getaway mutant paradise,” Gambit convinces Professor X to deploy an away team to the island nation of Genosha to A) investigate its claims and B) to get some R&R. (Episode 6: “Cold Vengeance”)

It’s all tropical, breezy fun until Genosha’s actual welcoming committee arrives— a battalion of war machines, who imprison and enslave our trio. Adding to the buzzkill? Each and every mutant in custody is outfitted with power-dampening collars, sourced by the Sentinel Program.

While toiling in a labor camp, an array of mutants, (including Easter egg appearances from Sunfire, Blob and Feral), use their abilities to build Sentinels. This god-awful arrangement is immediately rejected by Storm who ends up in “the box,” (really bad for her claustrophobia), and later by Jubilee, who stages her own jailbreak.

It’s Gambit who’s acting sketchier than usual. He even offers up information to the Mutant Control Agency, ratting out Jubilee’s rebellion and giving key intel on the X-Men. But at this point we think(?) we know which team’s he’s on…

The first appearance of Genosha and the mutate slave program. Read on to see how Wolverine and Rogue fare when they’re kidnapped by the island’s “Genegineer.”

Go in for the full event. Storm and a handful of New Mutants are kidnapped and brainwashed by anti-mutant terrorist Cameron Hodge.

In the episode, the time-travelling Cable is a rogue “employee” of Trask who’s dead set on destroying the “Master Mold.” See how his first comic appearance differs! He comes in guns first against the Mutant Liberation Front!

While ordered as the eighth episode on Disney+, we recommend watching this one after Episode 10, “The Unstoppable Juggernaut.”

Word’s gotten out that a mysterious “Dr. Adler” has developed a “cure” for mutancy, i.e. some kind of genetic overhaul that erases any trace of a mutant’s powers. He’s set up shop in the med labs of Professor Xavier’s longtime friend and colleague, MacTaggert. Professor X, visiting Moira in Scotland, is immediately wary of Adler, but he still tells his team about the cure.

The X-Men bristle at the idea. Which mutant in their right mind would willingly give up their powers, especially when those gifts could save others? Everyone’s mind is made up. Rogue’s lost in thought...

During a tussle at Angel’s mountain chalet, Cable makes his second full appearance, this time seeking Adler for his involvement in Genosha’s slave program. Adler is actually Warren Worthington III’s employee, and it would seem Worthington is also a mutant wanting to rid himself of powers.

Back in Scotland, Rogue’s smashed her way inside Adler’s lab, strapping herself in for what she believes is her one shot at happiness. That’s when buddy comedy duo Pyro and Avalanche cut in, kidnapping man of the hour Adler. They bolt with the doctor, only to pull off his hood and find the shapeshifter, Mystique…

The first full appearance of Apocalypse!

True to her comic book origins, Rogue’s “gifts” are as much a blessing as a curse. At one point, she was unable to touch another person in comfort, and a life without that connection was, at times, too isolating to bear. Here, Rogue confides in Storm about the first time she used her powers. It’s a piece of the puzzle to Rogue’s complicated history, particularly her ties to foster mom Mystique. Also the issue where Storm’s de-powered by Henry Peter Gyrich.

Although a wholly separate storyline, this great starter series opens with the global revelation of a mutant cure. Written by Joss Whedon, with sensational art by John Cassaday.

“Dr. Adler,” AKA Mystique, has Angel right where Apocalypse wants him as she administers the mutant “cure.” Revealing herself at the last fatal second, Angel, who’s partially funded the treatment, is now the first to fall. He arises as Archangel, a metallic-winged maverick who’s hardwired to kill.

Still on Muir Island, the X-Men encounter a whole crop of other dissatisfied mutants, including Abraham Kieros, Plague, (the Morlock who knocked out Gambit in “Captive Hearts”), and Autumn Rolfson, a woman wasting away from her own death touch.

This trio, plus Archangel, rounds out a miniature army—the Four Horsemen of Apocalypse. As War, Pestilence, Famine and Death, they quickly set about terrorizing Europe, first waging an attack at the Paris Peace Conference, before crippling military bases, farms and dams.

While the X-Men take off to confront the Horsemen in London, Rogue is asked to return to Muir Island to see if “Adler” has a way to reverse the cure. Mystique shows her true face to Rogue at this point, letting slip that she works for Apocalypse, and that her boss has a secret command center underneath Stonehenge…

Angel’s first appearance as Archangel, Horseman of Death. The design and overall look of the Horsemen, and Apocalypse’s spaceship, is faithfully adapted from these stories. Read issue #25 for the Horsemen’s full-fledged attack on New York…

That’s a wrap on the second part to Season 1, folks! So, get watching/reading, and in the meantime, stay tuned for Part 3, hitting this week.

CONTINUE WITH PART 3 OF OUR SEASON 1 GUIDE!

Read these uncanny tales and other essential X-Men stories in Marvel Unlimited today, along with thousands of other comics starring favorite mutants and more. Stay tuned for our Season 2 Reading Guide, and in the meantime, tell us which of these X-Men comics you’ll be reading with #MarvelUnlimited. And remember to stay posted to Marvel’s Twitter and Facebook for more weekly announcements and updates!