Our Complete Comics Guide to 'X-Men: The Animated Series’ S1 on Disney+: Part 3

Final part to Season 1! Read the comics behind the cartoon.

We’re wrapping up Season 1 with our comic picks for Episodes 10-13 of the beloved cartoon, ‘X-Men: The Animated Series’! All 76 episodes of the 90s mega-hit are up on streaming hub Disney+, so you can re-visit, re-enjoy or watch this show for the very time. And for each episode watched, we’ve got the comics that inspired each storyline.

Under the leadership of telepath Professor Charles Xavier: Wolverine, Cyclops, Storm, Rogue, Gambit, Beast, Jean Grey and youngest member Jubilee, devote their lives as X-Men. All born with remarkable power, they protect a world that hates and fears their existence.

Now, wrap up with the adaptation to one of the X-Men’s most famous storylines, Days of Future Past, plus the conclusion to the Sentinel Program plot that’s been brewing since Episode 1.

WATCH THIS BEFORE EPISODE 8!

The team flies home to find the X-Mansion totaled and Professor X missing and/or taken. And whoever is behind this demo job is clearly superhuman. Our two suspects? Colossus or Juggernaut, making their first appearances here.

Splitting off in pursuit, Jubilee stumbles on a construction site with some general hubbub, where remarkably, a young Russian mutant is doing all the work. With a steel exterior and the ability to carry, toss or throw a cool 50 tons, Piotr "Peter" Rasputin is the perfect demolisher. Perfect enough for Wolverine and Jubes to peg him as the guy behind the mansion. Meanwhile, the First National Bank is being ransacked…

Xavier’s bullyish stepbrother Juggernaut is on his second bank robbing binge, being big, dumb and all-around nasty as he finally dusts up with the X-Men and Colossus.

As buildings are dropped and trucks hurled, (“Tank you”!), the solidly built Colossus holds his ground, giving the X-Men time to rid Juggy of his mind-shielding helmet so Jean can zap him with amnesia.

Piotr even manages to impress Wolverine, enough to get an offer to stay at the mansion (once it’s rebuilt). But the Russkie cryptically tells us that he “must first find his sister” before we’ll see him again…

The first appearance and origin of Juggernaut. Read on to see some of that spiteful rage between stepbrothers, and to see Cain Marko’s first encounter with the Crimson Gem of Cyttorak, the mystic artifact behind Juggernaut’s strength.

Although he first appeared in GIANT-SIZE X-MEN (1975) #1, Colossus’ childhood in Siberia and complicated family ties are fleshed out here.

A classic Chris Claremont issue with John Romita Jr. on pencils. The perfectly-matched Colossus and Juggernaut throw down in a bar and it’s pretty heavy metal.

This two-parter takes its own spin on one of the most adapted storylines in X-Men history—Days of Future Past, found in UNCANNY X-MEN (1963) #141-142. In the comics, it’s an adult Kitty Pryde who psychically projects from the future, although the premise of needing to prevent Senator Robert Kelly’s assassination by the Brotherhood of Mutants is the exact same.

In these episodes, Kelly’s death marks a catalyzing event for the Sentinel Program, justifying its shift towards mutant internment and extreme policing. And in the span of a few decades, the Sentinels will begin to target humanity. Instead of Kitty, it’s Bishop who takes a leap to the past, and he gets quite a cool entrance plus a hover bike.

Turns out, Bishop is an energy absorbing freedom fighter, hailing from a timeline where almost all the 90s X-Men have perished. And where one of their own was responsible for Kelly’s death.

So, following a wild hunch by mutant technarch Forge, Bishop steps through a time portal and into one of the most confounding decades of them all, hellbent on taking out the would-be X-Man assassin—none other than Gambit.

X-MEN: DAYS OF FUTURE PAST

Start with the original event that inspired so many elements in these episodes. In the year 2013, Kate “Kitty” Pryde is a prisoner of the Sentinel state, one of the few surviving X-Men who are living through their final days. So vivid it's gut-wrenching.

Bishop’s first appearance! Start here and keep reading. While trailing ex-cop anarchist Trevor Fitzroy, Bishop and some XSE agents, (Xavier’s Security Enforcers), travel backwards from the Days of Future Past timeline. But Fitzroy pulls a stunt, and Bishop gets stuck in the present with his now-living legends. 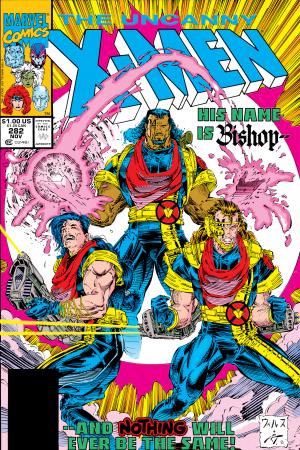 The issue that establishes Bishop and Gambit’s contentiousness. Introduced as the X-Men’s newest member, Bishop mingles and interrogates his teammates over a picnic…

After tripping through the present, Nimrod, a Sentinel 2.0, has a sick battle with Rogue who’s absorbed a bit of this n’ that from Nightcrawler and Colossus.

Bishop and Gambit begrudgingly fight for the same team after the Magneto-worshipping Acolytes attack a school bus full of kids… after a surly Danger Room session.

Bishop, Gambit, Rogue and Weapon X’s Maverick are all at odds about how to deal with an off his rocker Sabretooth. This comic also has an Easter egg callback to Rogue and Gambit’s car scene in Episode 12.

“The Final Decision” ties together S1’s dominating themes. Since “The Night of the Sentinels” Parts 1 and 2, the X-Men’s overarching menace hasn’t been an individual or group, but a set of ideals. Now, everyone attached to the Sentinel Program will be forced to challenge those ideals.

As predicted by Bishop, the “Master Mold” Sentinel has gained sentience, and with that, its own worldview. Now, humanity’s “final solution” rests in the hands of machine logic, and world leaders are already getting sacked.

What makes this closer extra satisfying is all its full circle moments. Jubilee evolves from “mall babe” to bonafide X-Man, Cyclops is able to bring his whole team home, and Magneto, saved by old friend Xavier, teams with the X-Men against Master Mold’s spawn. Even Magnus can acknowledge that the X-Men are “heroic fools”, brave enough to fly headfirst into what’s shaping up to be a suicide mission…

After taking a read of the comic, you’ll see how directly the episode mirrors the Master Mold’s appearance, impervious on its perch. X-Men co-creator Jack Kirby brought his god-like scope to this slice of the future.

That’s a wrap on Season 1, folks! So, get watching/reading, and in the meantime, we’ll watch hours of cartoons to cover Seasons 2-5.

Read these uncanny tales and other essential X-Men stories in Marvel Unlimited today, along with thousands of other comics starring favorite mutants and more.

Watch Marvel Movies and Shows in Order on Disney+