Read Captain Marvel’s comic arc with the Guardians of the Galaxy… for free!

Higher, further, faster! That’s how Carol Danvers, AKA Captain Marvel, rolls (or soars) across the universe. Using her powers to protect her planet and fight for justice as an Avenger, Carol is Earth’s Mightiest Hero!

Right now, you can read Carol’s intergalactic adventures in CAPTAIN MARVEL (2014) #1-6 for free on Marvel Unlimited, a digital comics archive of over 27,000+ issues! This is Kelly Sue DeConnick and David Lopez’s run on the series, which sees Carol teaming up with the Guardians of the Galaxy as she inserts herself in the middle of a Galactic Alliance!

The Guardians are just one of many Captain Marvel Team-Ups. From ferocious mutant defenders and aliens from outer space, to new Super Heroes, and an elite A-Force squad, Carol has worked with the best of the best to keep the beasts at bay. Speaking of bests, here are some of our favorite team-ups.

GUARDIANS OF THE GALAXY

When Carol helped the refugee Tic get back to her home in CAPTAIN MARVEL (2014) #1-6, they encountered mercenaries along the way. Carol fought them as much as possible, and even left her ship to blow them back with her cosmic firepower. Luckily, the Guardians of the Galaxy showed up to offer an assist. Tic, having fled Torfa to save her people from Star-Lord’s father, the Spartax King J’Son, saw the Guardians as her enemy. So naturally, Tic took stole their ship. When Carol and the Guardians caught up with her, Carol and Star-Lord worked together to calm Tic down who was rightfully distressed. Teamwork!

Carol and Wolverine go waaay back, to the days when Carol worked as a super-spy long before she was a cosmically-powered Super Hero. After a couple tussles teaming up against Natasha Romanoff, AKA Black Widow, they faced off against Victor Creed, AKA Sabretooth, and the Hellfire Club in LOGAN: SHADOW SOCIETY (1997) #1! Though they parted ways with Logan going on to join the Weapon X program, Carol and Logan are sure to reunite in an epic team-up again… 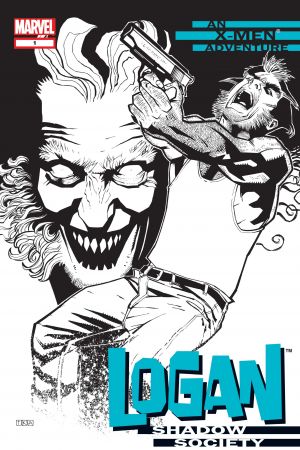 CHEWIE THE CAT, ROCKET, AND TIC

Chewie the cat is Carol’s constant companion and seems like a typical housecat… until a bombastic space adventure reveals that there’s more to Chewie than meets the eye! Carol teams up with the Nowlian Tic from Torka and Rocket to protect Chewie, a highly valuable Flerken who had just laid eggs!

Rocket spread the word they had a Flerken on their ship, but the warning came too late as a gooey hive attacked the troop! After getting beyond Rocket’s betrayal, the team worked together to fend off the attackers, and Chewie released her stored tentacles. (Flerkens have gateways to pocket dimensions inside them and can store such things like eggs and tentacles in their tiny bodies.) This puts a kibosh on the attack, but not before complete and utter chaos gripped Captain Marvel and the Guardians crew. Read this wild time through issue #8: 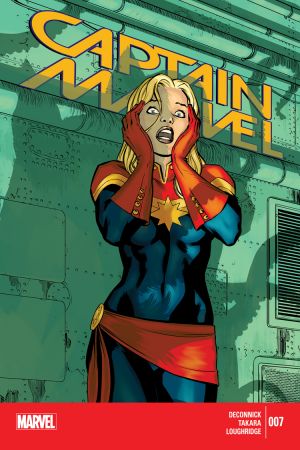 An out-of-this-world adventure! Polymorph Kamala Khan, AKA Ms. Marvel, joined with her idol (and alias namesake), the cosmic-powered Captain Marvel against the Kree. First, they met Dr. Walter S. Lawson, who recruited both heroes into his fold. Although he slipped up and used Carol’s outdated hero name, causing her to believe he was not on the up and up. On their way to stop Lawson from acting on a vendetta, Carol and Kamala defeated a Sentinel and ended up between a madman seeking revenge and the deadly Kree Starforce! It all goes down in MARVEL TEAM-UP (2019) #5: 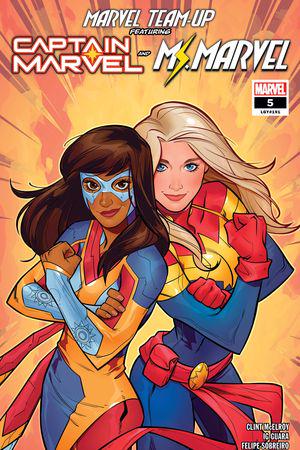 As one of Earth’s Mightiest Heroes, some of Carol’s best team-ups are with the Avengers. In one team-up, AVENGERS: THE ENEMY WITHIN (2013) #1, Carol fought the Grapplers, wrestlers turned Super Villains, alongside Jessica Drew, AKA Spider-Woman. Though they get knocked around a few times, they defeat the criminal crew!

Carol teamed up with A-Force, a band of Super Heroes led by Jennifer Walters, AKA She-Hulk, to protect the world against supernatural threats. The team included Alison Blaire, AKA Dazzler, Nico Minoru, AKA Sister Grimm, the Inhuman Queen Medusa, and newest member Singularity. After their time on Battleworld in 2015’s SECRET WARS, the gang got back together to track down a missing girl named Alice from a small town in Colorado. Danvers and Nico worked with monster hunter Elsa Bloodstone and they split off from the group. Though they are attacked by a giant bug who they realize was responsible for turning the whole town into insectoids!

The bug turned out to be the missing girl, Alice, and Carol convinced Nico that she’s powerful enough to use a spell to reverse the whole town. Read this body-snatching horror through issue #10: 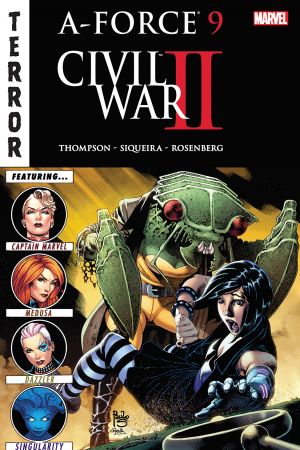 Whether fighting ruthless mercenaries alongside the Guardians of the Galaxy, defeating vengeful villains with Ms. Marvel, or stopping bugs from taking over, Captain Marvel slings powerful punches and saves the day alongside astounding heroes!