Close out Stark Week with these Marvel Unlimited highlights starring the Armored Avenger!

Tony Stark is Iron Man. He is also a genius-level billionaire industrialist with the best toy box in the Marvel Universe. Whether forging the future as the CEO of Stark Unlimited or building a new set of armor as Iron Man, this self-made Avenger is defined by a smart mouth and an even sharper mind.

Since his debut in 1963’s TALES OF SUSPENSE #39, Stark has slipped up, triumphed, failed, and even died a couple of times. (Don’t worry, it didn’t take.) He has also been humbled—but not too much.

If you love Tony Stark from the screen or the comics, you’ll want to check out these Iron Man starter stories on Marvel Unlimited. All are defining moments in his fifty-five-plus year history and are good jumping-on points for new readers.

Start at the very beginning. Although a time capsule of an issue, this origin established the fatal injury that first required Stark to don the Iron Man suit. Jet-setting socialite Stark had a significant dose of reality when he was kidnapped and made a working hostage by the terrorist Wong-Chu. With shrapnel lodged inches from his heart, Stark and Professor Ho Yinsen used their (likely) last days to escape their captors and create the first Iron Man.

This “Mark 1” armor was loaded if not a little clunky. But for a first draft built by a dying man, it was astounding. Stark had bulletproof access to destroy Wong-Chu’s operation, starting with its leader. More notably, Ho Yinsen’s sacrifice remained Stark’s constant marker as a hero.

Looking for a retro read? Try Iron Man’s first titular series. Five years after he assembled in AVENGERS (1963) #1, Marvel’s original futurist launched into this solo run, now suited up in the classic red and gold. And in the first issue alone, Stark went up against the machinations of A.I.M., and three Iron Men… all replicated from Stark’s tech.

In this now-famous arc by David Michelinie, Bob Layton, John Romita, Jr., and Carmine Infantino, Iron Man faced an implacable personal demon—alcoholism. After a stressful series of events involving Namor and the Roxxon Corporation, Tony Stark found his resolve waning. Then, a public armor malfunction ended in death for a diplomat, sending him completely over the edge. In a matter of days, Stark’s carefully constructed image took a careening nosedive. And, as Tony turned to drinking for stress relief and comfort, those closest to him struggled to break his pattern of addiction.

One of Stark’s darkest chapters, but an important one. 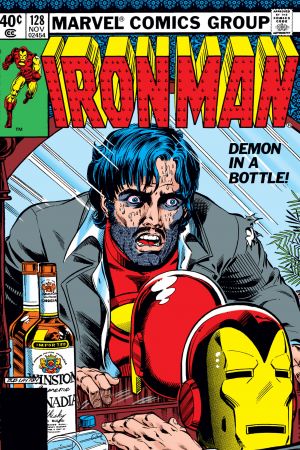 In this 21st century reboot, Stark underwent a 2.0 tune-up following an imprisonment in Afghanistan. He returned to the fold as Iron Man, now on the cusp of a “New World Order.”

In the “Extremis” arc, a nanite serum was introduced to the weapons market by the Futurepharm Corporation, a mega-industry with military intent. And, once their Extremis tech evolved into a virus, it overtook human biology giving way to meta-human makeovers – with explosive results.

In this six-part saga, Iron Man combated the next frontier of war, packaged as a utopian promise.

Captain America. Iron Man. Whose side are you on?

In CIVIL WAR, hundreds were left dead in Stamford, Connecticut, casualties of a nuclear superhuman incident that left a chasm of grief and confusion in the Super Hero community. As the decision to monitor heroes loomed large, Iron Man, staunch supporter of the Superhuman Registration Act, opposed the underground resistance of Captain America, leader of the Anti-Registration camp.

One of the most iconic battles in comics history, former friends became bitter enemies in a Civil War that was anything but.

Iron Man went full throttle in this Eisner-winner by Matt Fraction and Salvador Larroca that saw Stark in a new day job—as Director of S.H.I.E.L.D.!

Assuming this command after the events of CIVIL WAR, a relatively cool and collected Stark faced imminent danger in the form of Ezekiel Stane, son of Tony’s greatest nemesis, Iron Monger. Obadiah’s son was younger, faster, and even a touch brighter than Tony, a true blow to the ego. Zeke was also revealed as the mastermind behind a series of global arc reactor attacks – the \same tech that powers Iron Man.

This is also the series that gave Pepper Potts her first Rescue armor!

This series penned by Kieron Gillen kicked things off with the worst scenario possible. When the Extremis tech was re-released on the black market, Stark tapped into his greatest streak of brilliance to contain its spread. Four separate buyers, four evil agendas. All set to a race against the clock that drew in Tony’s closest allies and friends.

This run also gave us “The Secret Origin of Tony Stark,” played out in IRON MAN #9-17. An arc that covered the hidden history of Stark’s parentage, its outcome was as shocking for readers as it was for Tony. 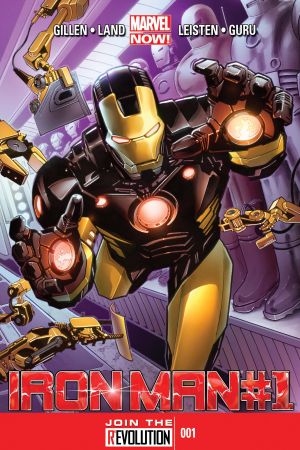 The interplanetary Avengers! In one of our favorite team lineups ever, Captain America and Iron Man assembled a crew of heroes to address Earth-bound and intergalactic threats.

Continue with NEW AVENGERS (2013), or read right through this series into Jonathan Hickman’s SECRET WARS (2015).

Sleek, stylish, and purely cinematic. From the creators that brought you ULTIMATE SPIDER-MAN comes cutting-edge armor, international danger, and the reemergence of an old villain with a new face. Intrigued? You will be after a shocker in the first issue.

This ongoing series also collided with the CIVIL WAR II event, a superhuman ethics battle waged between Iron Man and Captain Marvel over the right to protect, or prevent, the future. Continue with INVINCIBLE IRON MAN (2016) for Riri Williams’ (AKA Ironheart’s) solo turn in armor.

Iron Man. Captain America. Thor Odinson. These three foundational Avengers have been to Hel, space, and thwarted time-traveling/interdimensional beings alike. But when facing the 2,000-foot-tall space gods known as the Dark Celestials, these heavy hitters needed their most varied team yet.

In one of the Avengers’ most cosmically-epic arcs, acclaimed THOR writer Jason Aaron teamed with artists Ed McGuinness, Paco Medina, David Curiel, and Mark Morales to introduce the Avengers of prehistory, the first class of Earth’s Mightiest Heroes from 1,000,000 BC.

This 2018 run focused on the man outside the armor.

It also marked a new beginning for Stark’s business reach, and it’s a fresh start for readers too. Backed by a team of high-profile engineering and robotics experts, Tony founds Stark Unlimited to share his vision for the future on a greater scale. As always, this venture finds a few critics and rivals.

It's also the lead-in to the IRON MAN 2020 event currently playing out on Marvel Unlimited!

[RELATED: Who Is Arno Stark?]