Which Sword-Wielding X-Men Are You?

Total Nightcrawler, or an actual Wolverine? Find out now on Marvel Unlimited.

The sharpest X-event of all time, X OF SWORDS begins in X OF SWORDS: CREATION (2020) #1, followed by weekly chapters across key X-titles. This one-shot establishes the sprawling saga ahead for the island of Krakoa and the vast omniverse of Otherworld. A tower. A mission. A gathering of armies. Who will be the sword-bearing champions of Opal Luna Saturnyne, Omniversal Majestrix of the Starlight Citadel? Fated in her cards is the future of Krakoa, a land halved by an ancient war.

As teased in POWERS OF X #4, Apocalypse and his First Horsemen faced an otherworldly invasion for Okkara, the primordial island that was the forebearer to Krakoa. To save this world, Apocalypse had to split Okkara in two while trapping his Horsemen, and family, in another dimension. Krakoa remained on Earth, while the newly formed “Arakko” was lost with the Horsemen.

[RELATED: See How All Roads Lead to War in 'X of Swords: Creation' #1]

Now, Arakko seeks unification with its whole. The invasion for Krakoa has begun, and the island needs its champions. Muramasa. The Sword of Might. The Starkiller Sword. Grasscutter. Godkiller. Warlock. The Soul Sword. The Scarab. The Light of Galador. Skybreaker.

Before you read about these mutants in pointy arms, learn a bit about yourself, and some prominent sword-wielding mutants, with our personality quiz. Not only will you gain insight on a few of X OF SWORDS’ big players, you'll see your own reflection in the blade of destiny.

Which sword-wielding X-Man are you?

You’re throwing a BBQ for the crew! You have a whole lot of food to cut and serve. Do you:

Quick! You’re challenged to a fencing match! What’s the strategy?

You’re buying delicious snacks at the grocery store. Suddenly, a person bumps into you as they whip around the aisle! Do you:

You’re on a first date and trying to impress… What’s the approach?

The chips are down. You must step up and lead. What’s your style?

Ready for your results, O Fearless One?

Kind, clever, and friends with just about everyone, you love the drama and flair of a good adventure. You sweep yourself off your feet with that swashbuckling spirit! Pirate fantasies aside, you’re grounded by a strong sense of faith. You are also devoted to your family and peers—you see the potential in all.

A consummate sword master and expert fencer, Nightcrawler, AKA Kurt Wagner, has always gravitated toward a pair (or trio!) of rapiers as his weapon of choice. Abandoned at birth by his mother, raised in a German circus by a renowned sorceress, and later persecuted by an angry mob for his demonic appearance, Nightcrawler rose from adversity to heroism as a senior X-Man, currently serving on Krakoa’s Quiet Council as one of its most trusted members.

A teleporter who can range earthly distances, the Amazing Nightcrawler is a sight to behold in battle. See: this prehensile tail-sword-triple threat combo from his 1985 solo run. For more piratical antics, try 2013’s AMAZING X-MEN too.

You’re the best there is at what you do, and what you do is… actually quite a lot. Brawler, hero, teacher, soldier… whatever path you choose is a path traveled alone. It’s not that you don’t relate well to others (although, actually, you don’t)—you’ve just been burned repeatedly. Seeing as you’re older than just about everyone around you, you make for an excellent mentor or sometimes-cautionary tale.

You may find that your easily triggered temper inspires an animalistic urge to eviscerate or kill. You’re working on it.

For a long time, not much was known about the man named Logan. We now know that it was the Weapon X program that granted Wolverine his permanent adamantium upgrades, bonded to his skeleton in exchange for his humanity. Once a berserker commando for this exploitative enclave, Wolverine broke free from his programming to find his own path as a mercenary and hero. And, after serving with Canada’s own Alpha Flight, Logan made his way into the X-ranks in GIANT-SIZE X-MEN (1975) #1.

The Muramasa blade, one of Saturnyne’s champion swords, shares close ties to Wolverine. This legendary weapon first appeared in WOLVERINE (2003) #40, bestowed upon Logan following the murder of his wife and unborn child (the latter of whom survived as the definitely-not-dead Daken). Seeking vengeance for yet another tragedy in his checkered ledger, Logan carried the sword of this ancient samurai, forged from his own rage and desire. In WOLVERINE ORIGINS (2006), Logan wielded that which might kill him to great effect, all part of an unholy quest to fell Romulus. Although it was melted into bullets in ALL-NEW WOLVERINE (2015) #28, the Muramasa sword will be making its swift return. 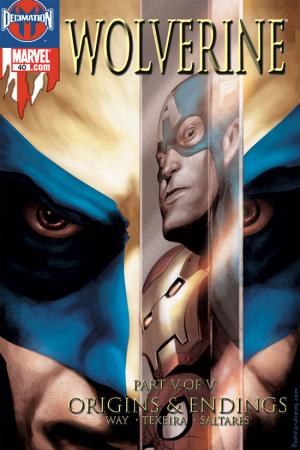 Your soul is a convoluted mire of chaotic impulse and arcane knowledge. You have no desire to fit in—you’d much rather embrace everything that makes you the one true Darkchilde of Limbo, or, you know, a very complicated person.

You’re no team player, but you are a loyal friend and colleague. There are two sides to your whole: one steeped in darkness, the other a formidable force of good.

The younger sister of the X-Man Colossus, Illyana Rasputin is a vastly powerful mutant who can teleport across space and time. She’s also one of the most mystically gifted mages in the Marvel Universe, studying under Sorcerer Supreme Doctor Strange. Recently, she accepted a position as a faculty member of the Strange Academy, in addition to a full-time gig with the new New Mutants.

As Magik, Illyana had some complicated teen years that ranged from a pivotal member of the New Mutants to the leader of a demon-infested realm called Limbo. Sure, the backstory may seem confusing, but all you need to know is that it’s this connection to Limbo that transforms Magik into her half-demon form. Her relic is the Soul Sword, borne of shards from her own life force.

Noble, brave, and driven by truth—you’re not just representing yourself, you may be representing an ideal or your entire family. You’re up for the challenge though. After years of struggle and an identity crisis (or two), you’re now ready to commit to a proud legacy.

Enemies should not be fooled by your virtue—you are a fearsome contender and have an intuitive grasp over what makes people tick. Some might say it’s like you can read minds, get in people’s heads…

Formerly the X-Woman known as Psylocke, Elizabeth “Betsy” Braddock is now one of Otherworld’s appointed guardians as Captain Britain. Carrying forth the mantle worn by her brother, Brian Braddock, Betsy is still new to this role, having achieved its status in EXCALIBUR (2019) #1. Instead of using the Arthurian Sword of Might, Betsy has chosen a psychic version of Excalibur as her weapon, a natural extension of the psychic knives and blades she wielded as Psylocke. An advanced telepath and combat artist, Captain Britain: Betsy is shaping up very differently than her brother.

In EXCALIBUR #6, we learned the current fate of the Sword of Might, now back under Brian Braddock’s safekeeping. Betsy walked away from this exchange with the Amulet of Right, the mythic totem that determines the next Captain Britain. For the Sword of Might’s first appearance, read CAPTAIN BRITAIN (1976) #1.

You’re gruff, grim, and frankly you don’t have time for this. A natural leader and drill sergeant, you’re most comfortable assembling a Black Ops mission or training your friends to hit their physical peak. While your outlook on life may be bleak, it’s completely justified! You’re not a pessimist—you’re a contingency planner for the worst.

If you’re currently living out your life on an island paradise as a newly-returned time-space version of your younger self (CABLE #1), make no mistake—you are Cable.

A Soldier of Fortune raised in a far-flung future, Cable, AKA Nathan Summers, is actually a stranger in his own time. Whatever time that is. The biological son of Cyclops and Madelyne Pryor (Jean Grey’s clone), Cable was infected by Apocalypse in infancy with a techno-organic virus. This illness quickly ravaged the mutant baby, and the only way to spare their son was to send Nathan two thousand years into the future, unfortunately to a dystopic wasteland ruled by En Sabah Nur. In this future, Cable’s telekinetic abilities were honed under the Clan Askani, time-traveling dissidents of Apocalypse who prophesied Nathan’s rise. (ADVENTURES OF CYCLOPS & PHOENIX)

Upon his return to the present, a now-militant (and much older) Cable became the leader of X-Force, a New Mutants-meets-wet works teen crew that took a more aggressive stance than the X-Men.

Recently, Cable has “retired” his older cybernetic model by erasing his adult self from the timestream. In his Dawn of X solo series, this younger, time-displaced Nathan is the inheritor of the Light of Galador, an alien sword of Spaceknight origin. 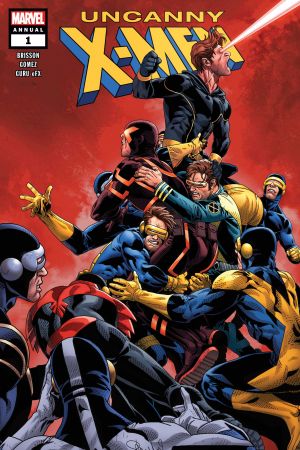 A born performer, you live for the spotlight. Your friends would say that you always go the “extra mile,” including flashy shows of power like defenestrating people. It’s exciting to see you in battle since you’re usually itching for a fight. You are defined by charisma, a pursuit of glory, and a serious fashion game. Severe shoulder pads, Glam rock hair, or monochrome chrome… you’re a stylish trendsetter who dresses from another place in space.

He is Shatterstar. AKA “Gaveedra-Seven,” AKA Benjamin Russell, AKA one of the most worthy sword fighters in all of X-Men canon. A genetically modified arena gladiator and renegade freedom fighter from Mojoworld, Shatterstar is blessed with a healing factor and extrasensory perception… in addition to a nifty knack for opening portals between dimensions. His signature sword, or swords, are two single-edged blades that are either broad or more katana-esque in appearance. He’s a casual slicer and dicer—many foes have met the wrong end of his steel.

One of his earliest appearances was a brush with Cable’s New Mutants in NEW MUTANTS (1983) #100, a dust-up that would lead to his recruitment in 1991’s X-FORCE.

Arguably one of the strangest mutant histories, it was revealed in X-FACTOR (2005) #259 that Shatterstar is the biological son of Longshot and Dazzler, and that his adult self actually helped deliver his baby self. Shatterstar is also Longshot’s father, having provided the genetic material that created his own… dad. After delivering himself, Shatterstar erased the memories of his birth from his parents’ minds, sending an infant Gaveedra-Seven one hundred years into Mojoverse's future so that his destiny as a clone could be fulfilled. Ya know what, just read the issue. 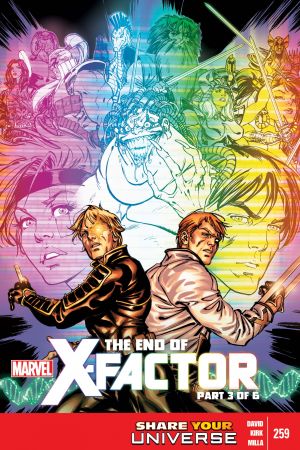 Read all the X OF SWORDS stories to come at your local comic shop!